The latest US Mint sales figures include one product addition, the Yosemite Quarter Three-Coin Set, versus the seven that debuted in the previous week’s report. The set and 2011 Medal of Honor Commemorative Coins were among the most prominent numismatic products to show better gains. 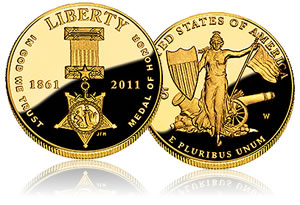 The Yosemite Quarter Three-Coin Set was released on March 3, 2011. It represents the third such issue since the America the Beautiful Quarters series was introduced in 2010. The Yosemite set outperformed the prior two releases with its sales debut of 11,441. In contrast, the Hot Springs and Yellowstone Three-Coin Set opening sales figures were 10,684 and 11,115, respectively. And those enjoyed one extra day in their debut sales totals.

2011 Medal of Honor Commemorative Coins had made their sales debut last week, but the period was a short span between their release on Friday to Sunday. With the first full week of sales now under their belt, their combined weekly gain was 37,317. That was just a few thousand short of their inaugural sales. The proof Medal of Honor Silver Dollar is the most sought after of the coins. It leads the uncirculated silver dollar by a 2.4-to-1 margin, or a combined total of 47,944 against 20,308. The next closest in total sales is the proof Medal of Honor $5 Gold Commemorative Coin at 8,044.

2011 US Army Commemorative Coins are settling down. Weekly gains ranged from a low of 419 for the uncirculated gold piece to a high of 7,074 for the proof silver dollar.

In terms of unexpected weekly increases, the 2010 Silver Proof Set and the Mount Hood National Forest Quarters stand out. The sets rose 8,315 against 2,614. Higher silver prices may have been a factor, making the sets look more attractive in the price department. At one point the silver melt value of the sets was about $8 less than its listing price. The Mount Hood quarters surged for no apparent reason. Each 100-coin bag jumped by more than 2,600. The two-roll sets soared by 17,334. Previous gains had been more in the 20 realm for the bags and the 130s for the two-roll sets.

In US Mint bullion sales, all sizes of the American Gold Eagles advanced. Across the board gains have been rare of late. American Silver Eagle coins rallied over the 10 million level for the year. A few thousand more and 2011 will already rank as the fourth best in annual sales.

The collector coin sales figures above have an "as of date" of March 6, 2011.