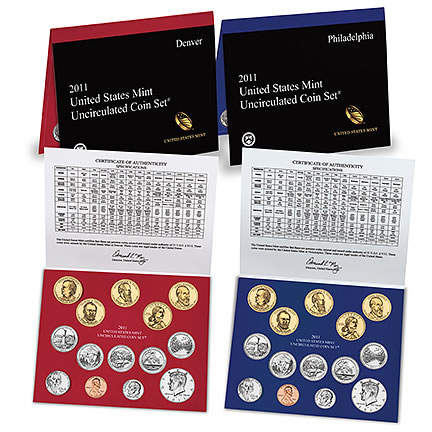 The United States Mint today, February 8, released its uncirculated 2011 Mint Set for a price of $31.95.

Its release date was first officially announced in September and is a part of a US Mint plan to issue core annual products earlier in the year.

While many coin collectors will describe the new product simply as the "2011 Mint Set," its official registered name is the 2011 United States Mint Uncirculated Coin Set®.

With a total of 28 coins packaged within two folders, the 2011 Mint Set includes double the coins as compared to the other annual issues released this year. Each folder contains 14 coins sealed in a blister and all from the same facility. One folder is filled with coins from the Denver Mint while the other has coins only from the Philadelphia Mint.

Uncirculated Coins within US Mint Set

Within each set are uncirculated collector versions of all of the 2011-dated circulating coins, including the:

Plus, the five newly designed quarters. The 2011 America the Beautiful Quarters included in the Mint Set are:

Under the America the Beautiful Quarters® Program, five new quarters will appear annually until 2021 for a total of 56 new designs. Each design featured on the reverse of the quarters will honor a site emblematic of a national park or other national site. One site has already been selected from each state, the District of Columbia and the five United States Territories.

New with the US Mint Sets this year are the brilliant coin finishes. The Mint stopped using its satin finish which had been used on the annual coin sets between 2005 and 2010. The finish is essentially the same as seen on business strikes produced for circulation. The major differentiating factors are the extra care taken during the production of the uncirculated coins within the collector set. Special presses which use greater force are also used for the coins, resulting in a sharper and more detailed image.

Order from US Mint

The product may be purchased directly through the Mint’s online store at: