Until now, 18 design candidates were available with several proposals of each design. The candidates were narrowed down through a selection process, with the final five chosen by the Treasury Secretary after receiving recommendations from the US Mint.

The new America the Beautiful Quarters and silver coin designs honor two national parks, two national military parks and one recreation area. They are the sixth through tenth in a series of coins that honor national sites throughout the U.S. and its territories until 2021.

As mandated by law, each circulating quarter and companion 5-ounce silver coins — an investor bullion and collector uncirculated, will feature the same designs on the obverse and reverse. Specifically, there will be three distinct coins with the same designs that honor each national site. The sites celebrated during the year include:

The obverse or heads side designs for every coin feature the same George Washington portrait. The following are images of the five reverse or tails side designs along with brief descriptions of each as provided by the US Mint. 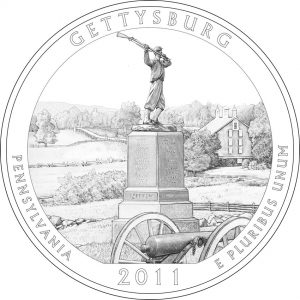 The Gettysburg National Military Park coin design depicts the 72nd Pennsylvania Infantry Monument, which is located on the battle line of the Union Army at Cemetery Ridge. Inscriptions include GETTYSBURG, PENNSYLVANIA, 2011 and E PLURIBUS UNUM. The coin’s reverse was designed by Joel Iskowitz and sculpted by Phebe Hemphill. 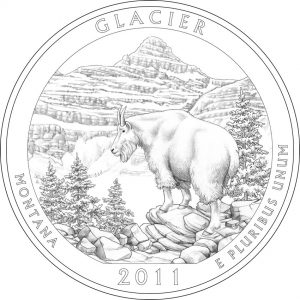 The Glacier National Park quarter reverse design depicts a classic view of the northeast slope of Mount Reynolds towering in the distance, while a mountain goat clamors over the rocky slopes of the park’s high country. Inscriptions include GLACIER, MONTANA, 2011 and E PLURIBUS UNUM. The coin’s reverse was designed by Barbara Fox and sculpted by Charles Vickers. 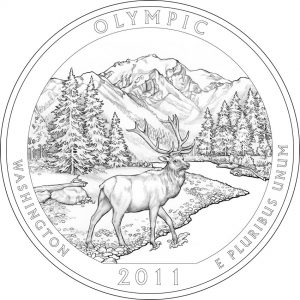 The Olympic National Park reverse design depicts a Roosevelt elk standing on a gravel river bar of the Hoh River with a view of Mount Olympus in the background. Inscriptions include OLYMPIC, WASHINGTON, 2011 and E PLURIBUS UNUM. The coin’s reverse was designed by Susan Gamble and sculpted by Michael Gaudioso. 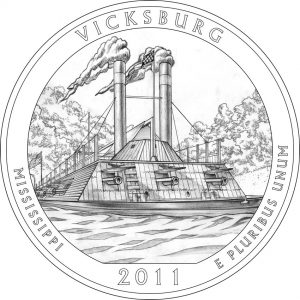 The Vicksburg National Military Park reverse design depicts the U.S.S. Cairo on the Yazoo River as it would have been seen when it served the U.S. Navy during the Civil War. Inscriptions include VICKSBURG, MISSISSIPPI, 2011 and E PLURIBUS UNUM. The coin’s reverse was designed by Thomas Cleveland and sculpted by Joseph Menna. 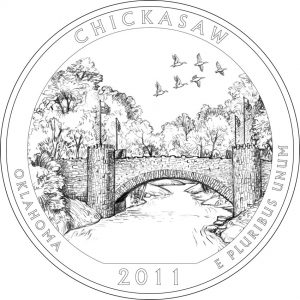 The Chickasaw National Recreation Area coin design depicts the Lincoln Bridge, built of limestone and dedicated in 1909 to celebrate the centennial of Abraham Lincoln’s birth. The bridge was the first constructed improvement in the national recreation area and a favorite scenic spot. Inscriptions are CHICKASAW, OKLAHOMA, 2011 and E PLURIBUS UNUM. The reverse was designed by Donna Weaver and sculpted by Jim Licaretz.

The US mint has increased the price for the quarter rolls by $7.00. Has the alloy used in producing the quarter increased along with the value of gold, platinum and silver to warrant a 21% increase? If the quarters are made of 5.67g of cupro-nickel, Is there any silver in a quarter today?