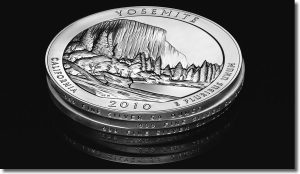 The United States Mint has sold its entire mintage of 2010 America the Beautiful Silver Bullion Coins™ to nine members of its network of Authorized Purchasers (AP’s).

It is now left to each AP to decide when they will offer them for sale to the public. No AP, as of this writing, has indicated a beginning sales date prior to January 3, 2010. The nine United States Mint Authorized Purchasers who have opted to sell the 2010 America the Beautiful Silver Bullion Coins are:

The US Mint uses the AP network to distribute its bullion products as a means to insure the public has access to smaller quantities of precious metals at near market value. There are eleven firms who are qualified to resell US Mint silver bullion products, but only nine have opted to participate in the more stringent conditions put in place for the 2010 America the Beautiful Silver Bullion Coins.

Additional requirements were added in response to reports of pre-sale premiums of 80 – 100 percent over the current melt value of the coins. The US Mint delayed their initial launch in order to evaluate the situation, then released them to Authorized Purchasers willing to accept a new agreement.

The new terms contained four stipulations. One condition requires that the AP’s not sell the America the Beautiful Silver Bullion Coins for more than a ten percent premium above cost. When the AP’s order the coins from the Mint, they agree to pay an amount equal to the London PM Spot for silver on a certain day multiplied by the number of ounces of coins ordered, plus a $9.75 per coin premium put in place by the Mint to cover production and distribution costs. The purchasers are allowed to add a shipping and handling fee for each order.

Another new requirement dictates that only one coin design may be sold per household, with the US Mint later emphasizing that it should be households in the United States and not foreign buyers.

The United States Mint will also be releasing collector grade 2010 America the Beautiful Five Ounce Uncirculated Coins early next year for sale directly to the public. The mintage of these strikes is even lower at 27,000 per design.

Go to eBay. Many for sale there. I wonder if this fits into the Mints guidelines?
They are selling for about $500 a piece. THAT’S NUTS!!!

US MINT you guys are either Stupid or Corrupted and may be Both.

These America The Beautiful coins are anything but…The U.S. Mint should take a lesson from Australia and Mexico before continuing this 5 ounce series. Rough castings at best. The only thing these have going is ‘scarcity’!

Anyone read the paperwork you need to fill out at Dillon Gage Inc. in order to purchase?! Driver’s license, social security number, consent that I read the Patriot Act! Jeez, all to buy some hockey puck silver bullion. Call me Glenn Beck, but I’d be a little wary of that!

I believe the AP’s have found a way to circumvent the Mint’s restrictions on selling only to the public and not to secondary market retailers. Look for yourself at the number of sets an individual ebay seller has to offer. Take for example “svmagiccarpet” and search the completed listings. Buying at less than $900 and selling for two or three grand, not to shabby! Capitalism at it’s finest.

Of, by and for the wealthy.

carter keane…not so! $900.00 for a set that contains $750 melt value of a low mintage item…Good deal if you can get an order in. But, as I posted earlier -these America the Beautiful coins are crude examples compared to the Australian and Mexican products.

Apparently, someone has figured out how to avoid the mint guidelines, check Ebay auctions. user ID coinsantiques.(with various numbers at end of ID), currently selling 50+ sets. Seller appears to be in Illinois if Ebay location is correct. Obviously, an AP is ignoring the guidelines by selling such a large number of sets to a secondary seller or is using ebay as an outlet under assumed seller ID’s. So much for fair access to all.

This is a new collectors series where dealers are controlling the prices. It is destined for failure. People may pay a lot of money for these, but collectors who can’t afford these or who have better things to do with their money aren’t going to care. The mint will be releasing the proof verions which will have a smaller mintage. I think it is funny. Dealers are going to be fighting to get as many of the collector versions as they can. At least collectors have a chance to get them at issue price. When the mint’s prices are a… Read more »

Regarding prj’s comment above: On Dec. 27th I called The Gold Center in Springfield IL (one of the AP’s) and was told they would be selling the coins to walk-ins only beginning Jan 3. Absolutely no phone or internet sales. You had to show up in person. So if an ebay seller in Illinois has 50 sets, he probably got them from The Gold Center. Either he has lots of friends & relatives or he hired the homeless to make the purchases for him. Either way, in this economy, and especially in the Midwest, when it’s possible to make the… Read more »

Right on RANDY! Most of the people buying and selling are the ones looking to make a quick profit. Not the collectors. This soap opera has been seen over and over again (e.g. 2006 w reverse proof gold and silver sets). Will wait until the collectors version comes out. At least we pay a fair price for them, plus lower mintage too.

The US Mint, the IRS, and the FBI should launch an investigation to get to the bottom of the coinsantiques thing that happened in Illinois. They had over 100 sets listed for sale this weekend, and could have thousands as far as we know. The Mint needs to get to the bottom of it to insure it never happens again, expose who they are, and if it takes yanking an APs rights, then it needs to happen.

I agree with all of you. I’m not going to pay 3k for the set even though I originally considered building 3 sets, one for each of my kids. I was truly disappointed by the way the totally inept mint handled this. I do however believe that the AP’s should be audited and banned if necessary for circumventing the guidelines. I believe that coinsantiques must have an inside connection to come up with this many sets all at once. Hopefully when the mint offers the collectors version, the dealers won’t clog up the mint’s website. In response to Randy, I… Read more »

The Gold Center selling update – I found a very interesting article on what happened on January 3rd. This is copied from an article originally printed in Numismatic News entitled “America the Beautiful Bullions Go to “Profiteers” “Jim Hausman of The Gold Center in Springfield, Ill., sold about 600 sets of America the Beautiful 5-ounce silver coins at $975 each on Jan. 3. That should make him a happy businessman, right? Uh, not so much. “These coins were supposed to go to collectors, and they went to profiteers,” Hausman said. And he puts the blame for that right on the… Read more »

The Mint should ban eBay sales of ALL newly released coins for one year from the date of official release, period! Think about it. That will end most of this usury quickly.

People should just stop buying the coins if they think prices are too high. Mint shouldn’t put restrictions on what people can do with them after they buy them. If people want to pay such a high price for these coins let them. If people quit buying them,the prices would fall. Interesting that there is such a ready market for them. Time will tell whether these were wise investments or not. At the high prices, people that want them and can afford them can get them. The question is whether the people that don’t get them will care after all… Read more »

Anyone know which of the ‘authorized sellers’ are currently offering. Every time I go to one of the listed sellers it’s a message; DON’T CALL it will be posted. I’m beginning to wonder if these ‘sellers’ are lining up their own buyers first. Anyone doubt that may be happening ??

I wonder if the APs would quit playing games if everyone kept calling their phones all day long and tied up their phone lines? The remaining APs have no respect for the public’s wishes, so I’m wondering why the public should respect for their wants and wishes to not call them? Perhaps they would finally get tired of their phone lines being tied up with calls, and finally put them up for sale like FideliTrade and A-Mark did? FideliTrade and A-Mark have done an outstanding job of getting their allotment sold to the public! They have acted in a timely… Read more »