After having fallen to two-week lows in the wake of dollar strength and near-year-end profit-booking, gold prices managed to stabilize and even stage a modest comeback overnight.

The keyword was ‘modest’ as the metal is still set to record an about 1% loss for the current week amid lackluster physical demand and the apparent shift not only in dollar sentiment, but actual dollar (and Treasury yield) values over recent (roughly, since election time) weeks. Nothing tells the dollar rebound story quite as well as the rise in rates on a certain instrument (shown here); 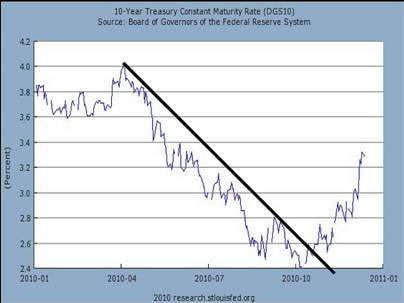 A trend reversal that has taken the Fed somewhat by surprise and has sent dollar morticians running for cover from angry subscribers who had been promised a funeral pyre for the US currency for the holidays. Such forecasts have now, conveniently, been…pushed back to circa QI of 2011 (or beyond). Just be patient, we are told.

Then again, we have also been assured that the euro will not be around for much longer than (insert a period of from one month forward as of June 2010, up to one decade, here). Well, don’t tell Angela Merkel that. The German Chancellor went into mano-a-mano combat with euro morticians this very morning, asserting that (at least Germany) will do "everything" to secure the stability of the euro.

EU leaders came to an agreement to construct a permanent backstop for the containment of (future) debt crises, one that will go into effect by 2013. For the time being, the extant $750 billion euro fund designed for healing that which is troubling certain EU members right now remains un-boosted. Thus, apprehensions remain among investors that a euro-existential threat is still manifest, despite the strong wording used by Ms. Merkel today.

Perhaps it was the fallout of Ms. Merkel’s bold statement, perhaps the ray of hope embodied in the EU looking-forward agreement, or, perhaps, just more end-of-the-year book-cleanup and position adjustments; whatever the factor (they are all equally plausible, as is the boost that the reading of the German business sentiment lent to the euro), the markets appeared to exhibit a bit more risk appetite than in previous sessions this morning.

Gold spot prices opened the final session of the week with a $3.10 per ounce gain and were quoted at $1,372.60 as against the US dollar at 80.01 on the index. Most of the metal’s gains came from a modicum of physical buying as opposed to significant dollar weakness.

Platinum was unchanged at the open, quoted at $1,695.00 per ounce, while palladium shed $2 to open at $735.00 per ounce. No change was reported in rhodium values (still at $2,280.00 on the bid side). In the automotive world, word is that General Motors (along with FoMoCo) is set to widen its lead over Chinese carmakers when government subsidies (tax breaks) intended to stimulate demand for small-engined vehicles expires at the end of this year. Evidently, Chinese consumers prefer the more reliable, more stylish offerings of American automakers (now there’s something you thought you’d never hear again).

Speaking of China, its Vice-Premier, Mr. Li Keqiang said yesterday that his government will undertake more efforts to "stabilize prices next year." Giving indications that perhaps Beijing is concerned about an overheating Chinese economy, Mr. Li (set to succeed Premier Wen in 2012) remarked that there should be a "reasonable" definition for growth rates in China for the next half a decade. His words carry plenty of ‘weight’ not only as those of the future Premier but as those of one who is currently perceived to be in charge of Chinese economic policy.

Local and regional markets finished slightly lower on Friday, as fears of official tightening via interest rate hikes continued to linger among investors. Perhaps no concrete action will be taken before 2011 rolls around (since nothing happened last weekend in the wake of uncomfortably high inflation readings) but the country faces elevated inflationary pressures through at least the first half of next year; a prospect that virtually guarantees an eventual rate-ratcheting maneuver.

Silver was off by 3 cents and started the day at $28.85 per ounce. Attempts to get back to above $29 might still be in the cards before the trading day draws to a close, but the going has gotten a bit more difficult (and not just in silver) following developments on the regulatory front. There is a developing standoff between Wall Street and the CFTC over the proposed curbs on speculative activity in commodities.

The CFTC is currently reviewing such stricter rules, while various firms are increasingly vocal about delaying the enactment of same. It appears however that the regulatory body might miss a mid-January deadline to impose limitations on the trading of oil, silver, gold, and natural gas. CFTC or not, the CME Group did raise margin requirements for palladium, silver, and copper futures contracts, effective next Monday.

Speaking of the CFTC and certain other ‘signs o’ the times’ — a civil complaint has been filed in California court against an outfit called American Bullion Exchange. The complaint alleges that some 80 customers may have been ‘relieved’ of about $5.5 million in the process of trying to buy bullion and coins (when in fact the funds were possibly used to trade futures and options and resulted in losses of about $2.2 million).

Among other things, the alleged victims were told that the firm would only invest their money into bullion and coins, that client funds were maintained in segregated accounts, that investments were insured against loss, etc.

During a recent conversation with a well-known Wall Street Journal reporter, this scribe noted that the more we are told that this is a "different ball-game than that in the early 1980s" the more evidence resurfaces that reveals that nothing (much) has changed. More so, these events could be a (still reliable) sign that the cycle is about to come to an end.

(Ed.) There will always be those who are eager to part people with their money, and (sadly) also those who let themselves be parted from their money for lack of proper due-diligence efforts. Such phenomena are (also sadly) the hallmark of "hot-to-trot" bull markets as they attract both scammer and victim with ease.