Ottawa, Ontario — A cousin of T-Rex is on the loose as the Royal Canadian Mint rolls out a new dinosaur collector coin just in time for the Canadian Museum of Nature’s long-awaited re-opening and centennial celebration weekend, from May 22 to May 24, 2010. 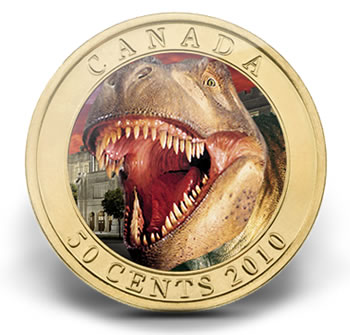 The Mint has taken this coin’s life-like motion of its lenticular technology to new heights with a 15-frame animation of a fearsome Daspletosaurus Torosus prowling the Museum’s grounds in downtown Ottawa.

Available to the public since May 3, 2010, this 50-cent brass-plated steel lenticular coin is the first of a series of three coins to be issued in 2010 featuring realistic animations of dinosaurs.

The Mint is looking forward to inaugurating the Museum’s Victoria Day celebrations on May 24, 2010 by presenting the Canadian Museum of Nature with its very own framed Daspletosaurus Torosus coin.

"The Royal Canadian Mint is proud to have once more merged art and technology to create a collector coin which celebrates Canada’s wealth of dinosaur fossils and the 100th birthday of one of its greatest natural history museums," said Ian E. Bennett, President and CEO of the Royal Canadian Mint.

"The Canadian Museum of Nature is a leading authority in the field of natural science, including palaeontology, and the Mint is delighted to join the Museum’s centennial celebrations through an exciting new lenticular coin featuring one of its famous dinosaur residents."

On July 21, 2010, dinosaur enthusiasts can begin tracking down the Albertosaurus coin which will also honour the centennial of Alberta’s Royal Tyrrell Museum. On October 6, the lenticular coin featuring Sinosauropteryx, another prized member of the Canadian Museum of Nature’s dinosaur collection, will complete the 2010 issues of this series.

To celebrate its exciting new dinosaur coins, the Mint invites young dinosaur coin hunters to join the Dinosaur Discovery Contest. Until July 30, 2010, adults are encouraged to enter their child, grandchild, niece or nephew to this fun contest, launched in partnership with chickaDee, OWL, Les Explorateurs and Les Debrouillards magazines.

The coin is also available at the Mint’s boutiques in Ottawa and Winnipeg as well as through our global network of dealers and distributors.

[…] May 3rd, dinosaur enthusiasts also began tracking down the Daspletosaurus Torosus coin, which will honour the centennial of Ottawa’s Canadian Museum of […]