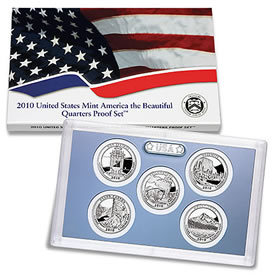 Since the law authorizing the new quarters is relatively new and the US Mint had a substantial amount of "catch up" to do in creating the groundwork for all 56 National Parks and National Sites to be honored from 2010 to 2021, this year’s quarters and related collectors products will get issued much later than typical.

That inherently implies that they will not be around as long, indicating their mintage / sales levels could be greatly affected.

If the Mint plans to get back on schedule, the 2011 set would launch very early next year, leaving the 2010 sets available for only 7-8 months.

The latest set contains all five 2010 America the Beautiful Quarters, which include the:

These honor the national parks and site located within Arkansas, Wyoming, California, Arizona and Oregon.

What the quarter-dollars look like is already known, as the Mint released the 2010 quarter images, albeit late, toward the middle of April. The candidate designs were known way back in November.

Like past proof sets, each coin includes the "S" mint mark to denote they were struck at the U.S. Mint in San Francisco. Unlike the the circulating varieties, the proof coins have sharper detail, and a brilliant, mirror-like surface.

The 2010 America the Beautiful Quarters Proof Set is priced at $14.95 — the same as the 2009 offering which actually includes one more quarter. On May 13 at noon Eastern Time, it may be purchased directly from the Mint website (http://www.usmint.gov/) or by calling the Mint toll-free telephone number 1-800-USA-MINT (872-6468).

Life and times how can you ask these prices?