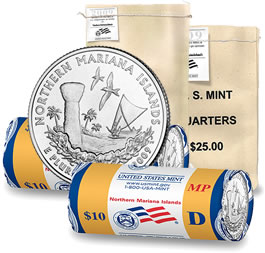 Aside from being occupied by the native Chamorros for centuries, the islands were claimed for Spain in 1521 by Ferdinand Magellan. They remained a Spanish possession until they were sold to Germany in 1899.

In 1914, Japan seized control only to have it taken away by the United States during World War II. It remained in the U.S. Trust Territory of the Pacific Islands until residents approved the establishment of a commonwealth with the United States in 1975, officially becoming the Commonwealth of the Northern Mariana Islands. 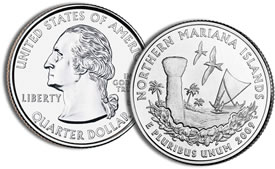 On the reverse of the Northern Mariana Islands Quarter we see a design highlighting the islands wealth of air, land and sea resources. A large limestone latte (an ancient indigenous Chamorro structure) is seen near the shore where a canoe is spotted.

Flying overhead are two white fairy tern birds while a Carolinian mwar (head lei), which signifies honor and respect, is seen at the bottom. It was designed by Richard Masters and sculpted by Phebe Hemphill. (See the line art for the original design candidates.)

George Washington is featured on the obverse, as he has been throughout both programs, and before.

To place an order, go to the Mint’s website at www.usmint.gov. All coin products that include the quarter may be found on the:

2010 will introduced the new commemorative quarter-dollar series, which the US Mint has named the America the Beautiful Quarters Program. The program features coins honoring American national parks and national sites. The first scheduled for release in January is the Hot Springs National Park Quarter.