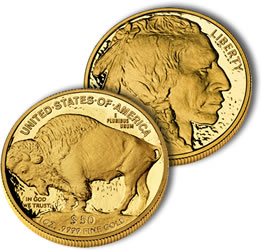 The release date is not surprising since it was tentatively announced earlier this month. What is nearly shocking is that there will be "no mintage or household order limit for this product."

A quick "Hurray!" comes to mind, before it is silenced somewhat with the prospects of the mad dash to order.

Given their lateness in release, the fact that they were suspended several times in 2008 due to "unprecedented demand" for gold coins, and their natural desirability, the pent up demand for proof 2009 Buffalo coins is enormous. The bullion versions of these coins opened Thursday, Oct. 15 to blistering sales. 71,500 were sold by the following Monday. As of Wednesday, 86,000 were gone, representing in those few days an astounding 50 percent of the entire total sold in 2008!

And the bullion versions are sold in bulk to the Mint’s several authorized dealers — not in tens of thousands of onesies or twosies orders as will occur when coin collectors buy. Even an optimist has to suspect the US Mint phone lines and Web site will again be susceptible to downtime, as happened last Thursday when nearly 30,000 Lincoln Coin and Chronicles Sets were purchased within five hours.

But then, it is not like any limit could prevent that if the one-ounce, 24 karat Buffalo gold coin price tag is within reach of the average collector who wants one. Perhaps that is what the Mint is expecting… that the price will keep some shoppers at home initially. Should gold remain above $1,050 an ounce as it has been, the price for Proof Buffalo coins will be $1,360 — a large increase compared to when the 2008s were launched and gold was cheaper. Yet, the 2008s on the secondary market are going for more than two times their Mint launch price. The $1,360 price does not look expensive at all by comparison.

The reality is that a limit could have increased the frenzy on order day. Still, there is no public Mint memo indicating how long the 2009s will be struck — it is close to 2010 after all — and how many 24 karat coin blanks they have. Most collectors are likely to purchase as soon as possible, "while they can." The 2008 experience and sudden halt of other collector coins has to be on the back of their minds.

Last year the Mint struck fractional sizes of the Buffalo gold coin. This year it will not as a result of a slashing of its numismatic portfolio — a decision the Mint made in Nov. 2008. The Mint reminds coin collectors of this fact within its announcement today.

Both the obverse and reverse of the Buffalo coin are the same basic design that first appeared on the 1913 circulating nickel, commonly known by most as either the "Indian Head Nickel" or the "Buffalo Nickel." This classic coin is considered by many to be one of the most beautiful ever produced by the US Mint and ran until 1938, when it is discontinued in favor of the Thomas Jefferson design.

The reverse contains an image of an American buffalo, also known as a bison. It is believed by many to be modeled after the creature named "Black Diamond" who lived in the New York City Zoo.

"Each 2009 American Buffalo Gold Proof Coin is presented in an elegant hardwood box with a matte finish and a faux leather inset," the US Mint said in its release announcement.  "The coins are exhibited on a platform which can stand at an angle for display when the box is open.  A custom-designed Certificate of Authenticity signed by the Director of the United States Mint is also included."

The coins are struck at the US Mint facility at West Point Mint and bear the "W" mint mark.

When available, the gold coin can be ordered directly from the United States Mint Web site at http://www.usmint.gov/, or directly here.

I wonder if this is worth buying on release date or if its better to wait for gold price to drop.

I went through the hassle of buying the Lincoln Chronicles set on release day, so I think I’ll skip release day if I decide to buy one of these proofs. There’s no predicting a price change for gold, but it doesn’t look like a sustained drop in price is just around the corner. Next week’s Treasury debt offerings, of a whopping $182 Billion in short-term and long term debt instruments, will be a test of whether or not the Fed will need to start monetizing our debt again. If Bernanke has to help bail out this offering, whether he wants… Read more »

Hope your right. The mint web site says $1360 but under that still says price to be determined

Five day average Thurs AM till Wed AM including PMs Thurs-Tues.
1050.28. That is if they leave out the Wed PM.

Well, well, well. McDoogle’s and others’ numbers put the coin at 1310. Yet, seemingly, the GOVT defies its own pricing grid and marks up the coin. Is it that someone at the US Mint can’t do basic math, or else is it that someone at the US Mint needs to explain why its LME AM fix data differs from Kitco’s and why the Mint is violating its own pricing policy. The US Mint pricing guide states Thur-thru-Wed average of LME AM fix will determine the range and corresponding price. The LME AM fix data was known at 830 this morning… Read more »

I see now why my numbers don’t match others. Even though the mint’s price grid mentions Thursday AM price fix through Wed AM fix, I’ve seen elsewhere where they calculated the numbers by including the PM price fix numbers in the average also – since the price grid says “through” that time period. I mistakenly included the Wed PM number in my averages, since they say the period ends at the “Wed AM” number. If you do it that way, add up all 9 numbers for the AM and PM price fixes (Thurs AM + PM; Fri AM + PM;… Read more »

Sorry about not seeing your post, Rob.
I don’t know how I missed it.