To celebrate their new headquarters, the Reserve Bank of Vanuatu has released a set of coins illustrating their historic development into independent banking through the growth of the building itself. 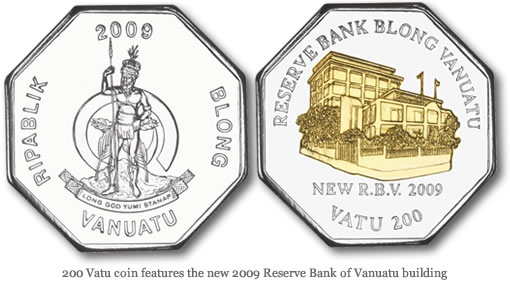 Vanuatu is an archipelago based in the South Pacific. It was first inhabited by Melanesian people but Europeans began to settle in the area in the late 18th century.

In the 1880s France and the United Kingdom claimed parts of the country and in 1906 they agreed on a framework for jointly managing the archipelago as the New Hebrides through a British-French Condominium.

Gaining Independence from France and Britain in 1980, the Central Bank of Vanuatu (now known as the Reserve Bank of Vanuatu) began operations on 1st January 1981.

One of the first tasks of the Bank was to implement monetary reform and so from that day forth, the New Hebrides Franc was renamed the Vatu, from a local language word for stone. Initially, the activities of the Central Bank were limited to the issue and exchange of currency. 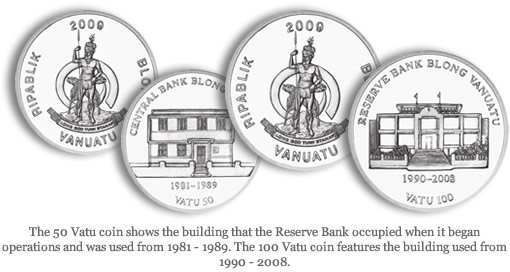 The design on the reverse of the coin features a different Reserve Bank Building; the 50 Vatu coin shows the building that the Reserve Bank occupied when it began operations and was used from 1981 — 1989. In 1986, the Central Bank was allocated a suitable plot of land on the central hill overlooking Port Vila and its harbour to build its new home.

Those interested in obtaining these packs should contact the Reserve Bank of Vanuatu, PMB 9062, Port Vila, Vanuatu.