On the grounds of the Old State Capitol Building in Springfield, Illinois, the US Mint officially launched the third design of the 2009 Lincoln Cents. Known as the ‘Professional Life in Illinois‘ penny, the crowd of Springfield citizens and visitors welcomed the new coin with pomp and excitement in mild 80 degree weather.

United States Mint Director Ed Moy along with US Senator Dick Durbin took part in the launch ceremony which appeared to garner much more public attention than ceremonies for the previous two designs.

Of course, Springfield is where Abraham Lincoln spent most of his adult life and it has developed a special relationship with those interested in the 16th President of the United States. Home to Lincoln’s Tomb and the Abraham Lincoln Presidential Library and Museum as well as a plethora of other Lincoln related sites, Springfield was the ideal location for a ceremony in his honor.

The Old State Capitol was chosen as the site for the ceremony not only because it is featured as part of the new cent design, but also because it was very familiar to Lincoln who served in the Illinois General Assembly. It was also here where Lincoln made his famous ‘House Divided’ speech and where he is laid in state after being assassinated.

One can easily imagine a pre-presidential Lincoln standing in front of the Capitol, just like the design shows on the new penny.

A slight breeze caused the flag above the Old Capitol to flutter as US Mint Director Moy prepared to introduce the coin to the waiting crowd.

"The professional life design-Lincoln speaking in front of the Old State Capitol-sums up his Illinois experience," said Moy. "Illinois is where Lincoln evolved into a successful lawyer and politician.  His service in the state legislature and Congress, and his debates with Stephen Douglas, paved the way to his election as President."

As many reported from the launch of the previous two designs, much of the crowd waited in the snaking lines around the grounds in preparation for the penny exchange, rather than taking a seat in front of the ceremony.  Almost all, however, were able to hear and see the speeches that preceded the exchange.

Once the speeches were finished and the new design unveiled on stage, Director Moy and Senator Durbin handed out new shiny pennies to eagerly awaiting children. Those who had been waiting patiently were offered the opportunity for an exchange from Chase Bank — $3 cash for 6 rolls of new coins.  Many made more than one trip through, which at its peak took about 50 minutes.

Those not interested in keeping all of their allotted pennies were able to find a profitable outlet for them once they left the capitol grounds.  A few enterprising individuals were offering up to $10 a roll, no doubt intending to sell them later at a higher premium. 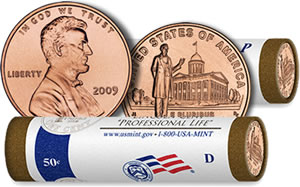 Now that the design has been officially launched, two-roll sets of the ‘Professional Life’ Cent are available for sale directly from the Mint via their website at:

The penny rolls may also be ordered via the Mint’s toll free number at 1-800-USA-MINT.

For more about the ceremony, check out Illinois Lincoln Cent Launch Photos.