Blast off through the galaxy with The Perth Mint as it launches the latest exciting series in its Young Collectors coin program – Space!

Unveiled today at Horizon – The Planetarium, the new coin program is designed to educate children aged from seven to 15 years about the wonders of the solar system through the interactive, engaging and fun hobby of coin collecting.

With the coin industry facing an increasingly mature collector-base, Perth Mint Sales and Marketing Director Ron Currie said that exciting new initiatives are needed to boost participation in one of the world’s oldest and most noble hobbies – coin collecting.

"We received an overwhelming response to the inaugural Young Collectors Australian animal coin series issued in 2008, yet we are anticipating that the new space program will be even more popular," he said. 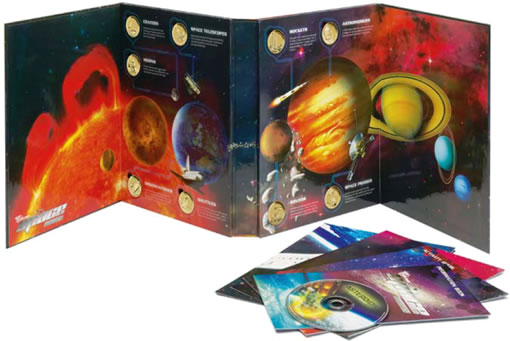 The lavishly illustrated album in which the coins are housed also includes an:

Each Young Collectors Space $1 Coin is issued as legal tender under the Australian Currency Act 1965 and portrays the Ian Rank-Broadley effigy of Her Majesty Queen Elizabeth II on its obverse.

To help get your coin collecting started, and for some more interesting facts about space, visit the Young Collectors website at www.youngcollectors.com.au.

The Perth Mint’s Young Collectors Space $1 Coins Album retails at just AU$79.95 [~$57 US] and is available from The Perth Mint Shop located at 310 Hay Street in East Perth, by telephoning FREECALL 1800 098 817, or from the Mint’s online store at www.perthmint.com.au.

Collectors can also purchase the new collector program at Australian Post outlets, the Scitech Shop at City West in West Perth, and through leading coin distributors.

Orders may also be placed via the CoinNews affiliate link: