In 1759, a few acres of land was donated by Princess Augusta to create a garden for rare and unusual plants. 250 years later the Royal Mint is celebrating the creation of this premier facility with the 2009 UK Kew Gardens 50p coins. 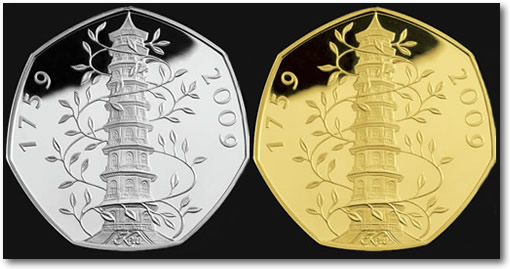 The coins are available in three forms: a 22 carat gold proof coin, a .925 sterling silver proof coin and a cupro-nickel brilliant uncirculated coin. Each has a face value of 50p, but as they are composed of metals with differing values, so are the purchase prices.

The first few years of Kew Gardens saw growth, but not the scientific stature it would eventually attain. The beginning of real change occurred in 1771 when King George III met Joseph Banks, an entrepreneur who had just returned from a world voyage with James Cook aboard the Endeavour. Banks had accumulated an impressive collection of animals, plants and portfolios. So much so that the King and Banks developed a close relationship, and Banks became the President of the Royal Society (UK’s National Academy of Science) for 42 years.

Banks was instrumental in the collection of plants from around the world, which would be grown and studied at Kew. Besides the scientific impact, Banks felt this process could lead to economic advantages, a feeling the King concurred with. Having access to foreign plants, new sources of food and materials could be cultivated with the express intent of improving what would have been available from native sources. In the latter part of the 1700’s, it was normal for ships leaving the colonies to have samples of plants to be taken directly to Kew.

Aside from plant-life, Kew was also a site of landscape and architectural design through the centuries. One such example is the Pagoda House. Completed in 1762, it was considered fashionable in the mid 18th century to incorporate Chinese design into gardens, a practice known as Chinoiserie. The Pagoda was extremely colorful, and incorporated gold gilded dragons.

Like almost all establishments, Kew Gardens had periods of growth and period of almost disrepair — both for its plant collections and buildings. Today, however, it is internationally considered the premier facility for botanical research and education. It employs an estimated 700 people with a budget around £56 million. An estimated 30,000 plants are cared for while over 7 million specimens are preserved.

Issued as legal tender, the Royal Mint has created the heptagon (seven-sided) coin with Ian Rank-Broadley’s portrait of Queen Elizabeth on the obverse, or "heads side." Inscribed are "Queen Elizabeth II," "DG REG FD" and "Fifty Pence."

Christopher Le Brun designed the reverse to include the Pagoda and plants. He describes his choice:

"Like the London Red Bus, the Kew Gardens pagoda is an instantly recognisable symbol and rather to be cherished for that reason. So I decided not to resist such a strong image but rather to enjoy drawing it. The tower’s identity and perpendicular clarity is very useful in a design. I had the idea early on that plants should twine around and grow up through the tower."

Both the gold and silver Kew will ship in presentation cases accompanied by a Certificate of Authenticity. The cupro-nickel coin comes in a colorful presentation folder. Each may be ordered online at www.royalmint.com.

If you are going for finest contents like I do, only pay a quick visit this web site every day because it presents quality contents, thanks