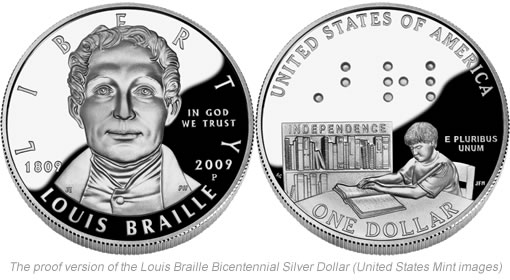 The United States Mint first released the Braille designs and a prototype in July 2008 during the NFB annual convention in Dallas, Texas. The unveiling showcased the unique silver dollar design, which US Mint Director Ed Moy told the audience about during Thursday’s ceremony.

"For the first time in history, the United States has a coin with readable Braille. The 2009 Louis Braille Bicentennial Silver Dollar honors the developer of Braille, a tactile code that has been instrumental in the literacy and independence of the world’s blind people."

The silver coins feature a portrait of Louis Braille on the obverse (heads side) designed by Joel Iskowitz and sculpted by Phebe Hemphill. The reverse (tails side) design depicts a child reading a Braille book.  The word INDEPENDENCE is displayed on a bookshelf behind the child and the word Braille, abbreviated BRL in Braille code, is featured in the upper field. The reverse was designed by Susan Gamble and sculpted by Joseph Menna. 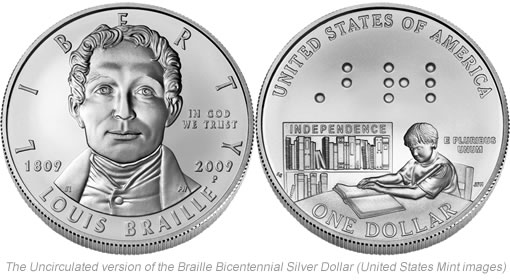 As Moy said, the coin is the first ever in the US to contain readable Braille characters. Three other coins — the Alabama state quarter and 1995 and 1996 Paralympic Silver Dollars — also had Braille, but were too small for the visually impaired to read.

Each coin is struck from 90 percent silver and 10 percent copper. The silver content weighs about 0.773 troy oz.

The commemorative coins may be ordered on the following US Mint pages:

A limit of 50 units each per household is in effect during the first 30 days of release. Introductory pricing is available until April 27, 2009, at 5 p.m. (ET).

*The mintage limit is 400,000 across all options. Within that, 25,000 coins are reserved for a special set that will be released later this year.

Sales are expected to be strong given the coin’s special design. Some expect a sellout similar to the 2009 Lincoln Silver Commemoratives. (The Lincoln uncirculated coin sold out Tuesday, although collectors can still order and stand in a waiting list. The proof coin will sell out at any moment.)

$10 surcharges from the sale of each coin are paid to the NFB to further its programs to promote Braille literacy.

The coins are authorized by Public Law 109-247, which was first introduced through coin legislation entitled Louis Braille Bicentennial Braille Literacy Commemorative Coin Act. The legislation includes many of the remarkable aspects of Louis Braille’s life, which is also summarized on the CoinNews sister site Silver Coins Today at 2009 Braille Bicentennial Silver Dollars.

Finally, for more information on the final US Mint product in 2009 to commemorate Braille, read about the 2009 Braille Education Set.]

You state “25,000 coins are reserved for a special set that will be released later this year”. What is this set & what is in it? Thanks