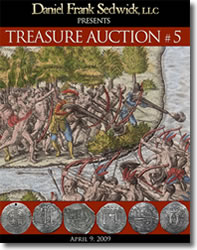 The latest Treasure Auction (#5) by Daniel Frank Sedwick, LLC will take place on April 9, 2009. Lots are now available for viewing on their website at www.sedwickcoins.com. Sedwick’s newest sale is his biggest ever. Says Sedwick:

"When we began our Treasure Auctions two years ago, we had no idea how quickly the concept would grow. Just compare our first sale of around 400 lots to almost 1800 lots now, more than a fourfold increase!"

This is also Sedwick’s first auction to offer live Internet bidding via iCollector.com.

"While we hope to offer fully live auctions in person some day, we feel we offer the next best thing with live bidding on the Internet combined with full descriptions and photos, both in this catalog and on our website, and our long-standing reputation for accuracy and fairness," says Sedwick.

This latest auction features extreme-size coins, from immense Swedish copper "plate money" to tiny silver cuartillos (¼ reales) from Spanish colonial mints, literally hundreds of which appear in this sale from a collection of "mini-coins" assembled over the course of 40 years. Also featured is what the catalogers believe to be the largest Potosí cob 8 reales ("Great Module") ever made. Even the shipwreck bullion section offers the extremes of huge silver and copper ingots and to tiny flakes of gold dust and nuggets.

Sedwick’s primary area of concentration, Spanish colonial cobs, is well represented this time by a collection of mostly 8 reales.

Among the usual shipwreck-coin lots (another Sedwick specialty) is a unique presentation-strike 8 reales from the unauthorized "Star of Lima" series of 1659 recovered from the "Jupiter wreck" off Florida. Several shipwreck Mexican pillar dollars from the first dates of 1732 and 1733 are also on offer.

Sedwick’s other major niche, shipwreck and treasure-related artifacts, is augmented this time with two important collections: The Art McKee Collection of 1733-Fleet (and other) artifacts from his Sunken Treasure Museum on Plantation Key, Florida; and finds from a Spanish Colonial site of ca. 1590 in the southern Caribbean.

For the first time Sedwick is offering a variety of paper money and maps, as well as medals and decorations. At the end is a continuation of the Tom Sebring Treasure Library of books relating to shipwrecks and treasure.