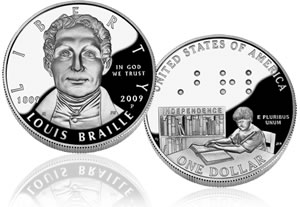 Through to April 27, the initial pricing for the bicentennial coins honoring Braille’s birth will be $37.95 for the proof silver coin and $31.95 for the uncirculated version, according to the Federal Register which published the Mint memo.

Prices will increase to $41.95 and $33.95, respectively, following the introductory period.

Additionally, the notice provides information for another Louis Braille product the Mint will offer described as an "Uncirculated Silver Dollar in Easy-Open Capsule." Priced the same as the uncirculated silver coin, it will offer an "easy-to-open capsule for those who would like to feel the tactile elements offered by the coin design."

The Louis Braille Bicentennial Silver Dollar is the first U.S. coin ever struck that contains readable Braille characters. The dots in the coin design spell “Brl,” which is the contraction for Braille.

The Federal Register is the official source of notices by government agencies. In addition to the Braille Silver Dollars, the published Mint document also includes prices for the 2009 Lincoln Silver Dollar, which the Mint began selling on Feb.12.

Here is the Federal Register document in its entirety:

DEPARTMENT OF THE TREASURY

SUMMARY: The United States Mint is announcing the prices of the 2009 Abraham Lincoln Commemorative Silver Dollar and the 2009 Louis Braille Bicentennial Silver Dollar.

Public Laws 109-285 and 109-247 require the United States Mint to mint and issue the Abraham Lincoln Commemorative Silver Dollar and the Louis Braille Bicentennial Silver Dollar, respectively. These coins will be offered in both proof and uncirculated conditions. In addition, the uncirculated Louis Braille Bicentennial Silver Dollar will be offered in an easy-to-open capsule for those who would like to feel the tactile elements offered by the coin design.