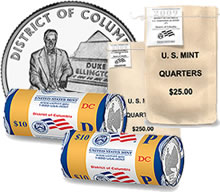 The DC quarter is the first of six coins to be released in the 2009 District of Columbia and U.S. Territories Quarters Program.

The public can purchase the new quarters directly from the Mint’s online store. The two-roll set includes 40 commemorative quarters minted in Philadelphia with the "P" mintmark and 40 coins from Denver with the "D" mintmark. The price tag is $32.95.

The new coins may be purchased on the Mint page:

The Mint’s 50 State Quarters® Program finished in November with Hawaii. Following the quarter releases of the U.S. Territories, National Park Quarters will be issued beginning in 2010 and last for at least 11 years.

I collect coins, many from the D, P, and S mints. I see that the United States Mint offers for sale many collectibles, for example the 50 State Quarters and the 2009 D.C. and Territorial proof sets. This may be a stupid question but would your coins have a different mint mark vis-a-vis the ones I named above?