On 14th January the Austrian Mint in Vienna issued a silver 5 Euro coin to commemorate the 200th anniversary of the death of one of Austria’s greatest sons, Joseph Haydn. 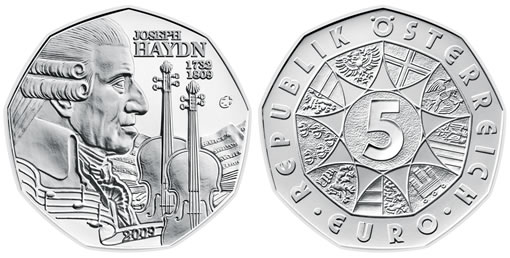 Born in 1732 in the village of Rohrau near the Hungarian border, Joseph Haydn began his musical career as a choirboy in the cathedral of Vienna. After his voice broke, he studied composition while keeping body and soul together by taking on pupils.

His big break came in 1761 when Prince Paul Anton Esterházy, head of one of Hungary’s oldest and greatest noble families, employed him as musical director in his court. Haydn conducted and played, but most importantly he composed pieces for the prince and his guests – including such illustrious personages as Lord Horatio Nelson and even the Empress Maria Theresa herself. She often claimed: "When I want to hear a good opera, I go down to Esterház." (The country estate in Hungary.)

His music soon became well known and appreciated beyond the borders of Austria. Pirate copies of his work began appearing in England, France and the Netherlands. Haydn received countless commissions from abroad. In 1791 and again in 1794 Haydn travelled to London for very successful and lucrative concert tours.

The world of music owes his genius much. Haydn invented and developed the form of the classical symphony as well as the string quartet. He composed 104 symphonies and over 99 quartets, as well as a host of other pieces including church music and operas. He first met Mozart in 1781 and they became fast friends.

Mozart admired and learned from Haydn’s work. He called him "Papa Haydn". For his part Haydn recognised the genius that was Mozart, but he never felt any jealousy. To Mozart’s father he declared: "I tell you before God, as an honest man, your son is the greatest composer I know either in person or by reputation."

He met Beethoven in Germany on his return journey from London. When Beethoven moved to Vienna, he sought out Haydn as his teacher, but their relationship was less harmonious than that with Mozart. However, Beethoven, like other classical composers, recognised Haydn’s own genius and built upon his works.

Haydn had bought a house in Vienna, and in his old age he withdrew more and more from public life. The occupation of Vienna by Napoleon’s troops in 1809 greatly distressed the old man. Napoleon posted a guard of honour at his door, but Haydn responded by repeatedly rising from his bed to play the imperial anthem, which he had composed for his Emperor Franz in 1797.

He passed away peacefully on 31st May, 1809. His mortal remains finally found their resting place in the church next to the Esterházy palace in Eisenstadt in 1932.

The new nine-sided € 5 coin shows a profile portrait of Joseph Haydn with two upright violins. The music notes in the background and beneath his collar are purely symbolic and are not taken from any particular work. The surface bears the common mintmark of the Europa Silver Series, marking this Haydn coin as Austria’s contribution to this year’s collection. The second side of the coin has the face value surrounded by the arms of the nine federal provinces of Austria.

The coin is struck to a maximum of 100,000 pieces in special uncirculated quality. Each of these coins are vacuumed sealed in a colourful and informative blisterpack. Another 450,000 coins in circulation quality are issued at face value through the banks.

The issue on 14th January really signals the start of Haydn Year 2009. It is expected that the coin will attract a great many of the visitors and music fans over and above the dedicated coin collector.