Open your penny jars and start digging through your couch, the 18th annual Penny Harvest is underway and kids need your change. Nearly 500,000 students from across the country have begun scouring for loose pennies and going door-to-door asking for spare cents. But the pennies are not for them, they’re for charity. And best of all, Penny Harvest teaches children about their value in working together, sharing and contributing to society. 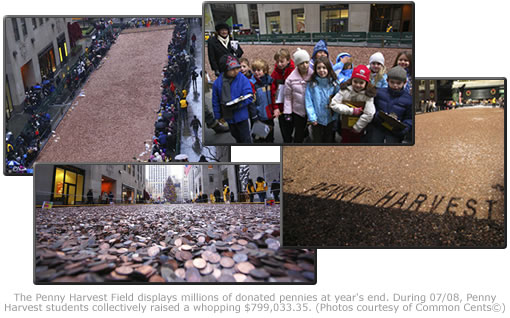 From now until Thanksgiving, students between the ages of four and fourteen will call themselves Penny Harvesters as they collect millions of pennies from family, friends and neighbors. All collections are then one hundred percent donated in the form of grants to non-profit organizations student leaders select. From helping the elderly to protecting the environment to over a thousand other worthy charities, the students make the call to where the money goes.

According to Common Cents, the nonprofit organization who started the Penny Harvest, $6.8 million in grants have been donated by children since 1991. And during 07/08, Penny Harvest students collectively raised a whopping $799,033.35 in pennies.

On the Common Cents website, Debbie Sigismondo at IS 381 in Brooklyn summed up a few of the benefits children receive.

"Each year the Penny Harvest has branched into more projects, and it has become an even more rewarding experience. Students come to identify the roundtable as the ‘go-to’ students for charity and service. The Penny Harvest students become strong advocates and team members."

A couple of cents here and there doesn’t buy much these days. But a mind-blowing impact is seen and felt when the combined efforts of Penny Harvest students and their collected pennies are unveiled each year in New York City near the world-famous Rockefeller Center Christmas Tree.

A massive 165-by-30-foot copper-colored exhibit, called the Penny Harvest Field, stretches as long as a city block between 50th and 51st streets. In December 2007, it was filled with some 100 million donated pennies weighing more than 300 tons.

With that many pennies staring you in the face, the children and the world see how everyone can make a difference.