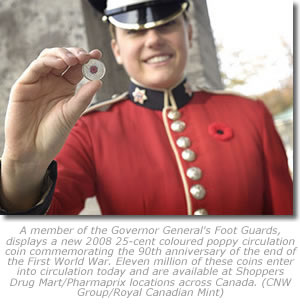 Ottawa, Ontario, – On the eve of Remembrance Day commemorations and the 90th anniversary of the Armistice, the Royal Canadian Mint, in association with the Royal Canadian Legion, is proud to issue its latest coloured circulation coin which features the iconic red poppy, Canada’s flower of remembrance.

The Mint will produce up to 11 million 25-cent coloured poppy coins, which will enter into circulation beginning today and will be distributed exclusively at Shoppers Drug Mart/Pharmaprix locations from coast to coast. Canadians are also encouraged to look for this special coin in their change.

"Through this unique circulation coin, the Royal Canadian Mint is keeping alive the memory of all Canadian veterans who served their country with such distinction," said Ian E. Bennett, President and CEO of the Royal Canadian Mint. "Mint employees are honoured to pay tribute to those who have bravely fought for our freedom, particularly on the eve of such a significant anniversary."

"Shoppers Drug Mart is honoured to be a part of the circulation of this commemorative coin that recognizes the valour and courage of those Canadians who served in the First World War," said Tammy Smitham, Director, Communications & Corporate Affairs, Shoppers Drug Mart.

"In partnership with the Royal Canadian Legion, our Pharmacist-owned stores will also be a distribution point for poppies during the Remembrance period to raise further awareness and funds for our Veterans."

Between 1914 and 1918 over 650,000 Canadian men and women fought to protect the peace and freedom our country enjoys today. Of those, more than 66,000 gave their lives and another 170,000 would be wounded. Lieutenant-Colonel John McCrae, a Canadian medical officer during the First World War, was responsible more than any other for the adoption of the poppy as a symbol of remembrance in Canada and the Commonwealth. McCrae was also the author of the famous war memorial poem In Flanders Fields.

The 25-cent poppy coin marks the third coloured circulation coin to be produced by the Mint and distributed in Canada, following the 2004 red poppy coin which honoured those who made the ultimate sacrifice to defend Canada’s freedom and the 2006 pink ribbon coin which raised awareness for the fight against breast cancer.

In addition to the circulation coin, the Royal Canadian Mint is proud to offer three commemorative keepsakes to mark the 90th anniversary of the Armistice:

The Royal Canadian Mint, which is celebrating its centennial in 2008, is an ISO 9001 2000 certified company and the Crown corporation responsible for the minting and distribution of Canada’s circulation coins. In operation since 1908, the Mint is recognized as one of the largest and most versatile mints in the world, offering a wide range of specialized, high quality coinage products and related services on an international scale. For more information on the RCM, its products and services, visit www.mint.ca.

To locate a Shoppers Drug Mart/Pharmaprix location near you, please visit www.shoppersdrugmart.ca. For more information on the Royal Canadian Legion, please log on to www.legion.ca.