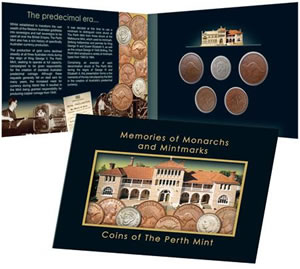 The Perth Mint of Australia on the first of October began offering a historic five-coin collection that contains pre-decimal copper coins struck at The Perth Mint between 1940 and 1964.

Unlike new, commemorative, silver or gold coin products that are common from government Mints, these coins have traveled through many hands and are in choice circulated condition with signs of wear. For these coins, it’s about their history. According to the Mint’s website,

The five-coin set contains examples of these historic denominations and are encapsulated within a ‘Coins of The Perth Mint’ presentation folder with information for each coin type.

These coins have the Perth Mint mintmarks with interesting variations. As described by the Mint:

King George VI Penny
Mintmark types: Dot after the Y in PENNY; dot after the last A in Australia; dot between the initials K and G (Kruger Gray).

King George VI Halfpenny
Mintmark types: Dot after the Y in PENNY; dot after the last A in Australia.

Queen Elizabeth II Penny
Mintmark types: Dot after the Y in PENNY; dot after the last A in Australia.

Queen Elizabeth II Halfpenny
Mintmark types: Dot after the Y in PENNY; dot after the last A in Australia.

The set is currently priced at:

Does anyone know what a FULL set of Australian pre decimal coins would be worth. The 1930 penny is in average condition. The coins are in the leather? cases with slots for each one. Thank you

Hi Gloria the 1930 is worth about $18000 if you can find a buyer and the rest off the set should sell for about $300 its not Good news as Australians dont apreciate there coin heritage as other countrys do, so good prices are seldom gained from my exsperiance,unless they are Gem or proof or verry rare not what you wanted to hear sorry Bede