2009 Lincoln penny design images were revealed by U.S. Mint Director Ed Moy Monday morning during a news conference at the Lincoln Memorial. The four reverse designs celebrate a different aspect of Abraham Lincoln’s life: his birth and childhood in Kentucky, his formative years in Indiana, his professional life in Illinois and his Presidency in Washington, D.C. 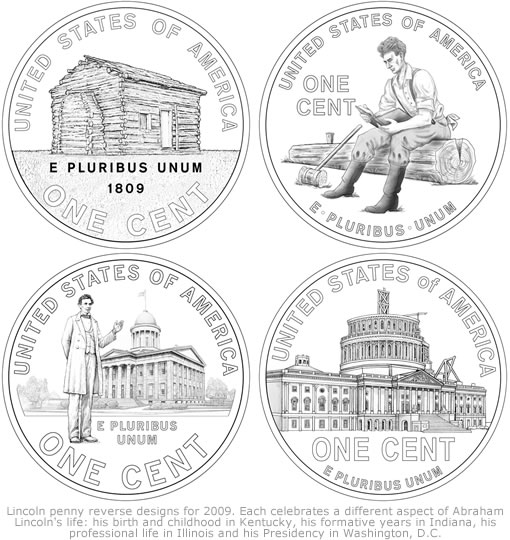 "This is a momentous occasion in the history of our Nation’s coinage because these designs represent the first change in the Lincoln cent in half a century," said Director Moy.

"These coins are a tribute to one of our greatest Presidents whose legacy has had a lasting impact on our country.  He believed all men were created equal, and his life was a model for accomplishing the American dream through honesty, integrity, loyalty, and a lifetime of education."

The four-coin series was authorized to celebrate the bicentennial of President Lincoln’s birth and the 100th anniversary of the Lincoln cent. Abraham Lincoln was born on February 12, 1809. The first new cent will begin circulating in the U.S. on the same day in 2009 — the 200th anniversary of his birth.

When that cent is issued, it will mark first time the image on the penny has changed in half a century.  In 1959, the currently used Memorial reverse replaced the well known Wheat Ears design. The new designs will be issued in approximately three-month intervals throughout the year.

The obverse or heads side of the one-cent coins will continue to bear Victor David Brenner’s likeness of President Lincoln, introduced in 1909. At the end of the 2009 Lincoln Bicentennial One Cent Coin Program, the reverse of the penny will feature a design emblematic of President Lincoln’s preservation of the United States of America as a single and united country.

In addition to new circulation pennies, the Abraham Lincoln Commemorative Coin Act also calls for up to 500,000 commemorative silver dollars for collectors in 2009.

Interesting choices. A few of them might end up looking diminutive when scaled to the size of a penny.

Maybe this will spur some more new coin collectors. The entire set will only be four cents!

Where is “In God We Trust”? Did they stick it on the side like they did with the new quarters? Shameful.

Wait are theseall reverses?
Maybe an obverse has the date and motto? Can we look forward to a new bust?
New collectors? Perhaps. A whole new generation for coin dealers to rob

Why do some people cry shame before they know something. As the other side remains the same, then the portrait of Lincoln will be capped with In God We Trust as it has been for the last 50 years. And the date is on the Obverse as well. “Liberty” still rules!

They are all beautiful coins. I would love to know just where to buy some. It seems that the Mint will no give out (any) information as to buying rolls or bags.

well to me it just looks like Lincolns hair got a little bit higher…all that hair spray!

Well I have called the US Mint, Dept. of Treasury, and the Fed. Bank in Chicago (for my home area) and no one knows much of anything. The Fed. Bank in Chicago stated to me that they will have to use up or remove the current pennies in circulation and as that happens they will gradually release the new pennies to the banks. Also the guy at the Fed. stated the rolls will likely be mixed, they wont be complete rolls of new pennies. So looks like the people who attended the ceremony last week in Kentucky have some real… Read more »

I have also called numerous banks in my state and the state where I came from. They don’t have them either. I have seen rolls go for over a hundred dollars on e-bay. That is INSANE people. Its a friggen roll of pennies worth .50 cents. a 1909s vdb is worth just as much. Almost as scarce as a 1943 copper penny. Fargetabotit. Full rolls are going to real hard to come by unless you work in a bank that can get them. I am sure these bankers already know what they have. It is a damn shame that you… Read more »

I think the new design for the penny is awsome i can’t what to have one.

I want the pennies so bad, they dont have it in Littleton coin, wher i buy my coins for my collection… I cant find the 2009 quarters either. I ordered the 2009 indian girl dollar coin but it didnt come and i waited for it for 2 months now… Waaaaaaaaaaaaaaaaah

The coins are circulating. One came across my desk today, and I am
in Mississippi. Be patient people. and $100 on ebay? Good grief

I have a log cabin one. It feels a tad lighter than the other ones. Does anyone know what the RM on the left and JL on the right in the grass stand for? The artists?

i have a book one

Does anyone know if the new pennies are being produced by the Denver and Philadelphia mints. I got my first penny today and it doesn’t have a mint mark but a dash where the mint mark is suppose to be. I wish more information would come out when they produce new coins.

I discovered a 2009 log cabin penny in my wallet. It definitely feels lighter than a 2007 penny I have. Is this part of the stimulus package? Haha..saving money by putting even less copper in the pennies.

hey what up i just started to colect pennies its amazing iv learn so much i hope i find a 2009 penny can u give me a clue were to find them that would so greati love pennies right now im working my way up to a millon but only have 3,711 pennies pennies is of the chang

I love the new penny design.It shows the life and purpose of Lincoln’s long lasting life.

Where is “In God We Trust”?

iwas relly excited about finding one of the new pennies. i hpoe i can collect the others and do a unit on Lincoln with my first grade class.

My brother-in-law said things must really be bad to make Pres. Lincoln stand up to take notice. HA-HA

Would someone kindly send me an e-mail as to whet are the three buildings on the new 2009 lincoln pennys?

I know Vince was wondering way back in October where “In God We Trust” was. I’m sure by now he’s flipped his cents over and noticed it above Lincoln’s head where it’s been for 100 years.

Hoe come I haven’t seen any pennies with the capital being built on the back yet ?

I agree with John I haven’t seen the capitol design yet.

i found one of those pennys in a handfull of change i got at the store.

I AGREE WITH THE PEOPLE WHO FIND IT HARD TO BELIEVE THAT OUR U.S MINT HAS LEFT OUT THE MOST IMPORTANT PART OF THE COIN, 2009 LINCOLN PENNY”IN GOD WE TRUST” , WHAT IS IT ? THE BEGINNING OF THE END???????????? WHAT WAS THEY STINKIN -THINKIN OF LINCILN,,,,,?

are these pennies rare?

I would like to know if they have any value to them. A penny is just a penny right?

How much are theese worth?

hey-i just got one of the lincoln pennies as change! look how long it took for it to traverse the system…it’s a ‘professional life’ edition. i am happy to own it. kewl!!!

Reporting from the future. I never spend pennies, they just build up in my house until I find a place that will roll them for free. And I saved ALL of the ones that I received with 2009 dates. Out of maybe 1000 now in my house, I have NO log cabins and a total of 6 among the other 3 designs. With billions of pennies minted in most years (yes, billions!), I find this very surprising. Where are they all hiding? No wonder rolls went for so much back when they were issued. Quarters since 2009 are also surprisingly… Read more »

Oh, and all pennies still have “In God We Trust”. All of them. Right there on the obverse, over Abe’s head.

I just found a capitol one on the back of a penny i got in change does it ave any worth?

I have a silver 2009 log cabin penny, done a little research and no banks have them and are hard to find , wondering if anyone knows the value of this coin !!

I have a silver colored 2009D penny log cabin any information would be great.

I have the 2009 with Lincoln stsnding on the back if the penny. On the back side of the penny where it states “ONE CeNT” it is exactly how i just typed it, with a lowercase “e” in the word cent. I dont see images of the penny online with the lowrrcase e. Thanks

The other day I found a 2009 D Lincoln penny with a colored background of a this is very rare can anyone provide any information as to the value of this coin? Thank you

I Just Found One the Pennies n the 4set,with Abe sitting on a log!.I was so shocked to see it..Is it worth Anything,would really like to know,I believe it say 2007,or 2009,my eyes aren’t that good these days..thank you..