The Perth Mint has pulled away the curtains to unveil the new and unique 2009 Australian Kangaroo gold coin design. The Australian Government official, legal tender bullion coins are struck in 99.99% pure gold, carry a guarantee in weight and purity, and include eight fractional sizes with two different reverse designs. 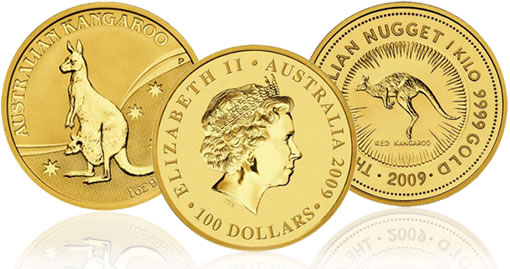 The series of 8 coins are minted for both investors and collectors and will be released October 1, 2008 for worldwide distribution.

The obverse or heads side of the gold coins depict Ian Rank-Broadley’s effigy of Her Majesty Queen Elizabeth II.

The 1oz, 1/2oz, 1/4oz, 1/10oz and 1/20oz reverse design portrays a kangaroo with a ‘joey’ in its pouch with a representation of the Southern Cross constellation and the seven-pointed Commonwealth Star in the background.

The reverse of the 1 kilo, 10oz and 2oz coins depict the a classic kangaroo design by Dr Stuart Devlin, jeweler and goldsmith to Her Majesty The Queen.

Mintage limits for each coin size are:

The specifications for each coin are:

Prices for the 2009 Australian Kangaroo gold coins have not yet been set.

How I can order New Gold Kangaroo Coins of Australia? What is the price of these coins?

How I can order New Gold Kangaroo Coins of Australia? What is the price of these coins?

in india this type coin avilable or not. not that how can i buy that procedure?