Jackson Liberty First Spouse gold coins will be available from the United States Mint on Thursday, August 28. The 1/2-ounce proof and uncirculated versions are priced at $619.95 and $599.95, respectively. Both versions have a face value of $10, are composed of 24-karat gold, and have a total mintage of 40,000. 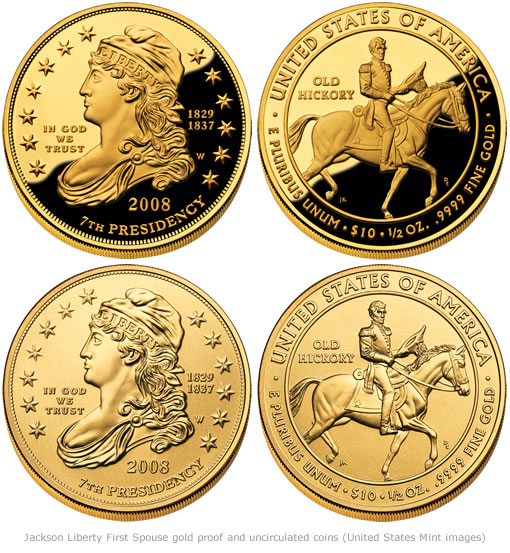 The current prices are the same as the Louisa Adams and Elizabeth Monroe spouse gold coins, even though gold has come down in price recently. (See live spot bullion prices.) Ironically, the 2007 Dolley Madison proof and uncirculated versions are still available and priced at $529.95 and $509.95, respectively.

Bronze medals bearing the likeness of the Jackson Liberty coin is also available for $3.50.

Sales of First Spouse coins were red hot when the series initially started in 2007. The Martha Washington, Abigail Adams and Thomas Jefferson versions were sold out within hours of their release. Since, however, the popularity of the coins have diminished.

Only time can tell whether the trend will change again.

Jackson was a widower while serving as president. As such and determined by law, the obverse or heads side of the coin bears a historical image of Lady Liberty. In this case, a Capped Bust Liberty design that was used during his administration.

The coin and medal design, as described by the Mint release announcement follows:

The image selected for the obverse of the Andrew Jackson’s Liberty First Spouse Gold Coin is a reproduction of the Capped Bust, Lettered Edge Half-Dollar minted from 1807 to 1836.

The reverse of Jackson’s Liberty First Spouse Gold Coin is emblazoned with an image of “Old Hickory,” a war hero who led a force of approximately 4,000 troops against the British Army at the battle of New Orleans.

On or after August 28 at noon (ET), the two Jackson Liberty First Spouse gold coins may be purchased on the U.S. Mint product page: