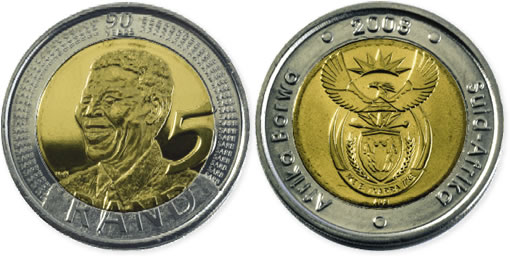 Five million bi-metallic coins featuring a smiling Mandela have already been minted and will be released into circulation as part of his official birthday cerebration on Friday, July 18. The R5 coins are legal tender and have a circulating value of about 65 cents (US) each.

At a ceremonial minting for one of the coins, Reuters news quoted Mandela as smiling and jokingly saying,

“I am a bit richer this morning and I am not going to associate with poor people any more … This is very nice.”

Many South Africans affectionately use the former president’s clan name of Madiba, resulting in the commemorative coin often being called the "Madiba R5".

Hey im from Joburg in Soweto and i have the coin,it looks new got is as my change about a few days ago.i hear if it has been t0uched then its worth the same R5:(.please anyone if you have any info on where i can sell it to or get more info concerning the coin feel free to call me and advice me.073 063 6109thank you.

please somebody.give us a clear info about the bdaycoins.i´ve got some coin to sell as well.

Only worth something if graded and sealed in a capsule.

I have Mandela R5 coins, MS 67 and PF 69 ultra cameo mandela 90th birthday, capsuled and sealed. Alas, due to circumstances I need to sell them.

Alice, if you got your coin as change, it has problably been through 100’s of different hands, and as such it is considered a circulated coin. Ungraded it had a face value of R5. In this case being a circulated coin even if you do grade it, it will most likely be graded between a VF30 – EF40 on the sheldon grading system, which means it will be considered to be worth approx. $3 – $5 U.S. Take in account that it will cost $16.50 to grade + shipping to the USA. If you do the maths, you’ll be losing… Read more »

Marlene, what are you looking to sell them for?

I have 5 mandela 90th bdy coin so wat do I do with them or do I keep em safe?wt r thy worth?

Hello, to keep it short, the Mandela coins.
How do I know I have the grade coin that is of high value (PF69)?

lols! these coins willdrive yal crazy! new age is all fake n ol dis grade nonsence lmfao! keep da coins for sentimental value only, honor tata n stop wishing to cash in on em! ul only stay frustrated, trust me our government would never let out riches to us just like that? they would rather keep em for themselves i mean they would ve announced that we buy em capsulated if they meant well by the coins instead only a few know of grades and the capsule stories

Keep the coins the value will be high after 25 years thank you.

i have three of them received it one lucky day from the bank .im waiting for that day

Dear Collector, at the time of Mr M’s birthday, these coins were offered to the public through banks, etc. Brand new! I know, because I watched them remove the plastic from the batch I bought mine from. No serial nrs or boxes though. I still have these coins. It’s never been in circulation as I kept them as momentos for my child and I. What’s your comments on that one? How would I be able to prove my story and what would the value of my coins be?

Hi guys i have about 38 of the 90 birthday R5 mandela coins,4 of the big old R1 coins with also have old presidents heads on,1 R1 note,1 R2 note,1 R5 coin 0f 2000 with mandela’s head on the back of it.If anyone can tell me whats it worth and where i can sell them please let me know it would just be intressting to know.

I have a ANACS graded PR70 South African Proof NELSON MANDELA 90th birthday coin for sale……first I need to know the true value……any help out there!!!!

These guys have a huge discounted special on the NGC Graded Mandela 2008 coins, just bought 30 for R980 and received 10 coins free. Worked out to R735 per coin and sold my first batch within a few days for R1600 per coin. Just ordered 30 more coins – but you HAVE to ask for discount!

Hello fellow coin collectors. Does any body know the monetary value of a (PF69 Mandela) coin ?

Hi There, I know about coins, If you have a PF69 2008 mandela proof coin it is currently valued at just over R70 000, if you have a PF69 or PF70 these are keepers for a while the expected to be freely trading for R350 000 in the next 2 or 3 years, the PF70 is expected to reach over R1 Million in about 4 or 5 years, however it is better to sell it in a year or 2 coz once it reaches the million mark getting a buyer may be difficult. The PF69 is a good investment, these… Read more »

Hie Moosa..i have an MS66 Madiba 5R, mint and untouched, with serial number, would you know the current value

sound like you know what you are talking about I also have two R5 coins that I bought from the bank has not been in circulation but I don’t know how to go about the grading story and then I came across a total different R5 this one I got as change. It has Madiba’s, R100.00 coin, 20 c coin, and other figures as well. Are they new in circulation or what. Please advise soon

hi all? The following are areas or people you can request info from, Sacoins, Coin traders and sagold coins! Short and sweet if you got Mandela coins when you recieved change from a shop! dont count it worth anything but just the value it has, R5! if you want to collect coins you have to buy them a price ie the Ms 66 @ +- 4k etc (you can get the Catalogue from Sacoin/ Coin Traders etc)it comes in a container with serials and a barcode! dont Open it and you will have value later that is if you want… Read more »

Good day, I am new at this Coin Collecting thing but over the past few months I have fallen for them. I don’t know much about grading them and I would like to do exactly that. I am in Pretoria, so if anyone can help with info on where to find a grading outlet, that would be great. I have read that many of you say that the Mandela coins that have circulated are worth nothing, but the other day I read the SA Coin website and it said that all coins have value, it might not be as much… Read more »

Hi everyone… I’m a teller @ FNB. What does uncirculated mean? 2008 July when those 9th bday coins came, they were given to all the banks. And as a teller, when I receive money, I have to take it out from the bags first and count it before putting it in my safe. Meaning when I do that, it has has already been touched. Then comes a customer wanting one, when he/she receive it he/she touches it — because we don’t gives give money out in the plastic, unless it’s a lot. So if that customer takes that coin straight… Read more »

where do i sell my 90th birthday mandela R5 coin? please let me know. thanx

Hi.. Botshelo, uncirculated coins are those that come from the SARB, and are still in sealed packets. They are uncirculated provided they have not been used as legal tender (as money). My understanding is that once the coin is handled by you (the teller), and then passed on to your client, it’s already circulated / almost uncirculated (AU grade) as we call it. Bev, there are several grading outlets in South Africa. SANGS(South African Numismatic Grading Service) is one of them, but this is a local, albeit cheaper. If you do an online search, you should be able to locate… Read more »

Hi, I am a collector for the past 2 years. Only graded coins are worth more than face value (R5). Proof coins i.e pf69 is worth more than mint state i.e ms66. There were only 5000 proof coins minted as to 5 million mint state. If you buy a coin from anyone, dealer or private, make sure you don’t pay too much.

Let me try to simplify ths…. Coins that u get as change at the shop they worth close to nothing……y? They have been mass produced n we all have them n even today u still get it as change…..so for now the mandela coin u get in the circulation(shops) are not rare….mayb in the next 100 years they will worth 2g to 4g. N the are mandela coins which were made at the same time when they made those that u hev but those ones are special coins they have never bn to the shops…they r collectors items they were… Read more »

there was never free investment, buy a graded coin from an aproved registered coin dealer and keep it for 5 years or more u’ll then resell. Use your curculated R5 coins before they loose value

Jip, this is the story most of the trading houses sell you, they paint rosy pictures with over inflated returns on the money you spend with them while “investing” in rare numismatic graded coins. But as soon as 5 years have passed and you ask them to sell your coins the sales all of a sudden dry up. They put your coin on mandate and another 2 years down the line they still have not realised your return. I have had coins (with good grades by NGC) for which we paid a too much, and still up to today 8… Read more »