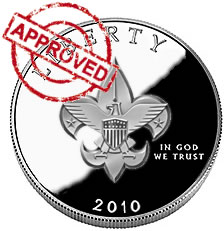 A commemorative Boy Scouts coin just moved closer to becoming reality. On May 15, the House of Representatives passed H.R. 5872, an act "To require the Secretary of the Treasury to mint coins in commemoration of the centennial of the Boy Scouts of America, and for other purposes."

They did so with strong bipartisan support similar to their very recent passage of the palladium Saint-Gaudens double eagle coin legislation. Although 8 Democrats voted against the bill, they were easily overwhelmed with the support of 215 Democrats and 186 Republicans.

Legislation must now pass in the Senate and then get signed by the President to become law.

H.R. 5872 is officially entitled the Boy Scouts of America Centennial Commemorative Coin Act and calls for 350,000 silver $1 coins to be minted in 2010. The collector coin would contain 90% silver and 10% copper.

Rep Pete Sessions [R-TX] introduced the bill in April and said at the time,

“Boy Scouts are a significant part of American culture, shaping the values, citizenship, and skills of millions of young men,” Sessions stated. “As an Eagle Scout with four generations of Boy Scouts in my family, I strongly value the Boy Scouts’ history of instilling a sense of duty to God, country, and self.”

Will H.R. 5872 become law? In the 110th Congress, 248 members of the House of Representative and the Senate have participated in Boy Scouts of America as Scouts or adult leaders. That along with its nearly unanimous "yes" vote in the House is extremely promising.

For a perspective of the argument, visit the Dissident Voice article, Congress’s $3.5 million “Bake Sale” for the Boy Scouts.

CoinNews readers have shown strong support for the coin as well. Check out some of their recent comments.

I am looking forward to buying a couple of these commemorative coins. I’m not a coin collector, but as a Boy Scout volunteer, I know the Centennial is a once-in-a-lifetime thing, and this coin will help me remember the occasion.

From the sale of the coin, Tax money, my money, your money going to an institution that will not allow me, an Atheist into their ranks, nor do they allow Gay’s, I would have to say this is not a good thing.
I was a Boy Scout, and they will not have me anymore.

Separation of Federal dollars going towards an organization that outright discriminates and is religious based is always needed.

The boy scouts of America is a private organization that is based on a Christian point of view. They discriminate against Homosexuals, and Atheists. They are a private organization so I am not mad about that, but this Scout coin is a government mandated fund raiser for an organization that discriminates against the said people. This is wrong. This is the United States government funding bigotry. That is why I will not buy this coin, and I will do all I can to get it off the market.

Thank you, and good day.

I don’t beleive 350,000 coins will come close to filling the demand. There has been over 115,000,000 youth who have gone through this program since 1910. The present annual registration of youth members runs about 5,000,000 each year with many millions more alumni sitting in the shadows. Just a thought.

If you read the bill as it is written the government by law requires that all costs involved in producing, packaging, shipping, etc of this coin along with the $10 surcharge are to be passed on to the purchaser. The concern of the government somehow rewarding an one hundred year old organization that has done more in the way of free service to our fellow citizens regardless of race, creed or orientation because it is the right thing to do just simply amazes me. If those who feel discriminated against by the likes of 6 to 18 year old boys… Read more »

HOORAY!! IT’S ABOUT TIME WE HONOR BOYS WHO DO NOTHING BUT HELP THEIR COMMUNITY AND OUR NATION. WE’VE BECOME AN “IT’S ALL ABOUT ME” NATION. MOST THINK THEY DON’T HAVE TO GIVE BACK, ONLY TAKE. THESE YOUNG MEN MEAN NO HARM TO ANYONE, I KNOW THIS FIRST HAND. MY SON WILL BE AN EAGLE SCOUT THIS FALL AND I HAVE VOLUNTEERED FOR THE PAST 8 YEARS IN HIS CUB SCOUT PACK AND THE BOY SCOUT TROOP. THEY TRUELY AIM TO SERVE AND HAVE LEARNED TO BE DECENT, HONEST, HARD WORKING YOUNG MEN. SO LEAVE THEM AND THE ORGANIZATION ALONE. IT… Read more »

…You boy scouts discriminate against me, and people like me. Its not that simple not supporting you (I have been doing that). The problem is that the united state does other things for them as well. These things are simple, but they show that the united states is supporting bigotry. As a human being I will not stand for this hypocrisy. Look at your organization you are bigots. The population of the boy scouts is predominately christian. The boy scouts will not allow atheists in their organization (I am ok with that as long as the government has nothing to… Read more »

Kyle Everyday the United States supports financially and in other ways organizations and entities that I find to be appalling and discriminatory. Planned Parent hood is a good example, without government funds this organization could not keep their doors open. What exactly is it that money is paying for? Well they do some good things however the fact they support and in some places arrange and perform abortions is absolutely discrimination. Why is an unborn human have any less right to life than does yourself or any other person? This bigotry is far worse than anything you have mentioned about… Read more »

I realize that, but saying there are other organizations that discriminate out there does not justify this in any way. By choosing the lesser of two evils you are saying you are the lesser of two evils I understand that, and respect that. I am upset the government is helping to fund them. Thats a given, but its hard to deine that that does not create some bias within the organization. I am even more outspoken, and active on a number of issues other than this one. Also I am not attacking them I am attacking this piece of legislation… Read more »

Government funds for a private club that is religious in origin and discriminates? Just say NO!

You are not kicked out of Planned Parent Hood for being Atheist or gay. Do you see the difference? While both organizations receive federal funding, Planned Parent hood can’t discriminate based on religion (or lack of religion). I love boy scouts!

So one organization doesn’t do means the other doesn’t as well? Please think before you post.

“While both organizations receive federal funding”. They do?

It would be awesome if the “federal” government gave the Boy Scouts of America even 1% of the $305 Million of FREE money given to planned parenthood EVERY YEAR.

Why is planned parenthood getting so much free money?

This coin funds them. Also they are allowed to use federal buildings free of charge.

Well Planned parenthood for one doesn’t discriminate against people. They preform a service for people (whether you agree with the service or not…which I will not say where I stand so we can stay on topic). Really Planned parenthood has absolutely nothing to do with the BSA or the issues behind the coin. I have no idea why it was brought up.

This coin will represent about 1% of their funding that comes from the private sector. That is not a real stability federal source of funding. $350M represents nearly 50% of the funding that supports Planned Parenthood and the half million dollar executives salaries. True Planned Parenthood will not say no if a gay couple wants to have an abortion which is unlikely; however, Sanger and Planned Parenthood promote the idea of “race hygiene” as outlined in the founding documents of the organization. However, those around her wanted her to promote lethal chambers to gas the children of the unfit, but… Read more »

Planned parenthood has nothing to do with BSA. It is only distracting from the main issue that we are discussing. That issue is that the BSA is getting funding from the Government. Equality, and freedom is what out government is supposed to protect. So why are they funding them at all? As I have said I do not care if they boy scouts let people like me in because they are a private organization; but when they receive government funding, no matter how small, I have find that wrong. I am not anti-BSA I am only advocating that the government… Read more »

So providing the funds for over 50% of the operational support of planned parenthood that does not allow a child the right to enter this World is better then prohibiting adult leaders that are gay and providing 1% support to Boy Scouts? What is the real comparison? Funding as you put it has everything to do with this conversation. Our government is suppose to protect us from all enemies foreign and domestic not to jump to any one person. I do not support the actions of Planned Parenthood in denying the right of a living being. However, if we really… Read more »

Kyle, The BSA is not a Christian organization. It is not based on a Christian point of view though its point of view has much in common with Christianity. It is inclusive to most all major religions who believe in God. They even include Zoroastrian!! This fact is trivial to verify with a simple web search!! If you wish to be informed, I would also encourage you to research the history of Boy Scouts and the fundamental tenets of it’s founder. Now none of the above will make you any happier. Perhaps the following. Here is what I suspect… The… Read more »