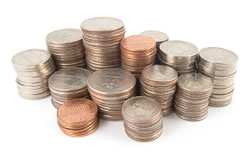 The final 2008 figures are sure to change as metals fluctuate further this year. Still, the penny and nickel stand out with a waving shout to their negative seignorage.

Yet, 2007 coin production costs were far worse when copper, zinc and nickel metals peaked in value. Let’s look at those numbers…

When United States Mint Director Ed Moy testified on March 11, 2008, before the Subcommittee on Domestic and International Monetary Policy, Trade and Technology, he provided the following Fiscal 2007 costs in minting the penny and nickel:

The cost differences between 2007 and today are striking as well. More so when you take a closer look…

The following first two columns have actual 2007 figures provided by the U.S. Mint. Now note the final two columns. The totals here are derived by using the current penny and nickel mint costs instead of those from 2007. By calculating costs in this way, "apple-to-apple" comparisons can be made.

*2007 Mint Cost Totals column applies 1.67 cents for the penny and 9.53 cents for the nickel, as provided by U.S. Mint Director Moy in testimony before the House for 2007 production costs

**Current Mint Costs Used column applies 1.26 cents for the penny and 7.7 cents for the nickel, as recently provided by the U.S. Mint for current 2008 production costs

Regardless of whether the "Coin Modernization and Taxpayer Savings Act of 2008" becomes law, the table highlights how fluctuations in copper, zinc and nickel prices have and can make a significant difference in coin production costs.

And, here’s the kicker, even if the act should become law, steel prices could potentially experience similar volatility in years to come.

I thought this country was in debt up to it’s neck…thank you China and
the Arab states for the loan…why are we changing the penny now? Is it broken or crumbling in our pockets? Here the good citizens in this country are struggling to cut back in order to survive and our government is finding ways to spend our money carelessly in these hard times….What is the “cents” in that?

What if we made the dime worth 5 cents and the nickel worth 10 cents? Then the cost to make each would be lower than it’s worth.

If it cost more than a dollar to make, why not pay people 50 cents to turn in the millions of pennies we have in our piggy banks?
At least that would save money in not having to make more.