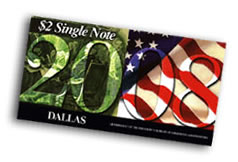 The Bureau of Engraving and Printing (BEP) has announced that the new 2008 Dallas $2 Single Notes are available today, May 12, 2008.

The Dallas banknotes are the fifth $2 collector bill released in 2008. The Atlanta $2 single notes were first off printing presses in January followed by the New York $2 notes in February, the San Francisco $2 notes in March and the Chicago $2 notes in April.

Interested collectors should purchase early since previous $2 notes sold out almost within hours of their availability.

In addition to the above specifications, the new $2 note offering is also:

The price for one Dallas note is $7.95. While discount orders of 50 or more have typically been available and priced at $6.95 per note, the BEP has lowered their household limit to 50 only with this offering. In addition, they warn that orders above 50 are subject to rejection.

The rest of the reserve bank notes will follow throughout 2008.

The new collector $2 notes are available from the Bureau of Engraving and Printing page, 2008 $2 Single Note (Dallas)

How many out there are upset with BEP’s botched web site for ordering ($2.00 Dallas note) this item?

I certainly am and I sent them a not so nice email about their botched web site ordering page for this item. You can never get through on the phone either.

I’ll bet all the higher ups at BEP and their “Special Friends” got theirs!

Any comments to this? Have at it! I would love to hear how one really gets to buy something from BEP.

I had the same problem with another item quite awhile ago.

I agree! First, they didn’t start online orders when they indicated and then the web site goes down. These $2 notes sell out so fast that you have to plan your time (and hope) to get them. Then the problems.

They did send an e-mail out today saying the site was “under maintenance.” That was decent. Would have been nice if they sent another when they got it back up!

Mike Unser - November 26, 2021 8
U.S. coin production in October ran the quickest for a month since July, broke a streak of two straight monthly slowdowns, and registered above...