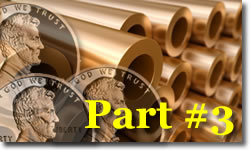 The debate to change the metal composition of U.S. coinage was waged on the House floor Tuesday.

With the surging prices of metals like zinc and copper, it now costs more than a penny to make a penny and about 7.7 cents to make a nickel.

A new House bill entitled "H.R. 5512, the Coin Modernization and Taxpayer Savings Act of 2008" would seek to change that and it was that bill, which was in debate.

The proposed legislation would give the Treasury Secretary the power to change the composition of coins and use less expensive metals. It also would require the United States Mint to produce steel pennies within six months of the bill’s enactment.

What’s at stake with no change? According to Rep Luis V. Gutierres, the subcommittee Chairman who held a hearing over the bill on March 11, a continued loss of $100 million dollars annually. Gutierres stated,

These losses are mounting rapidly, and with commodity prices forecasted to stay near existing levels for several years, we need to act immediately to give the Mint the flexibility to lower the costs of producing the penny and the nickel."

Some lawmakers believe the bill is unconstitutional, as it would give authority to the Treasury that belongs in the hands of Congress.

Rep. Ron Paul commented that there was no "…reason to further delegate our power (to the Treasury Department), and essentially abdicate Congressional oversight as the passing of HR 5512 would do."

The U.S. Mint, and Directory Moy specifically, would like to see changes in the bill before passage. The six month provision to change the penny, as an example, is time restrictive according to Moy. A 18-24 month timeline was suggested.

In addition, the rules in the bill prevent the Mint from changing a coin’s metallic content until after its costs exceeds its face value. It would be more beneficial to change a coins composition prior to it losing money or, take measures to reduce a coin’s cost simply to save money even though it’s still profitable.

According the Director Moy’s testimony before Rep. Gutierrez’s committee, only the penny and nickel have negative seignorage. The dime costs a little over 4 cents, the quarter nearly 10 cents and a dollar coin roughly 16 cents to make.

A House vote on the bill is expected this week.

Make penny out of plastic and nickel out of aluminum. Since you can recycle plastic to make pennies and recycle aluminum cans into five cent coins!

Go back on Gold and Silver–Problem solved.

Perhaps if you kept the value of the $ stable you wouldn’t have to worry about the cost of the metal in a penny or nickle. Go on the gold standard. Go Ron Paul!

If the U S mint starts making pennies from plastic, I hope they put something else in them to make them float. I metal detect the beach and find alot of the zinc pennies. Just think, kids might find a penny floating in the surf. But then how many people will pass and not pick up a coin on the ground.

go back to the gold standard.

Please, go back to minting the half-dime, but in lieu of silver (as it was done for nearly 80-years) use the same composition as the current dime. By all means, simply eliminate the (nearly) worthless penny. Thanks for this important consideration, Don Yeier