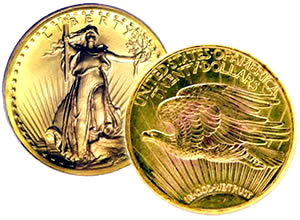 The United States Mint announced on Friday that Secretary of the Treasury Henry Paulson has authorized the issuance of a 2009 version of the 1907 ultra-high relief Augustus Saint-Gaudens $20 Double Eagle coin.

According to the U.S. Mint, the 2009 legal tender Saint-Gaudens’ designed coin will be:

The 1907 Augustus Saint-Gaudens $20 Double Eagle is considered by many to be one of the most beautiful gold coins made in the history of U.S. coinage.

United States Mint Director Ed Moy has announced plans to bring back the Saint-Gaudens’ design in March of 2008. At the time he commented,

The design of the 2009 gold version includes a few changes

In details of the announcement, the Mint described the design changes for the new:

In most respects, the new legal tender gold coin will authentically reproduce the ultra-high relief gold piece.  The obverse design (heads side) will be based on the obverse of the original Saint-Gaudens design executed in 1907.  The reverse (tails side) also will be based on those pieces and will include 14 sun rays.

The edge of the coin will feature the same raised edge-lettering as the 1907 pieces.  The edge-lettering features the inscription “E Pluribus Unum” with stars serving as delimiters between the letters.

As approved by Secretary Paulson, the new coin will have several modern elements.  The obverse of the new coin will feature 50 stars, instead of the original 46 stars on the obverse (heads side), which represented the 46 states in the Union in 1907.

The CCAC recommended that the obverse design be modified in this manner to honor all 50 states in the Union today.  Also, responding to the recommendation of the Commission of Fine Arts, the United States Mint will inscribe the Roman numerals “MMIX” (2009) in a style similar to the original Saint-Gaudens design.

Additionally, the inscription “In God We Trust” will appear on the reverse design of the new coin because current law requires placement of this inscription on all U.S. coinage.

Also in the news is the introduced congressional legislation to recreate a palladium version of the 1907 Saint-Gaudens’ designed coin. The bill currently has support in both the House and Senate and would authorize the Mint to continue the series of the coin as a yearly numismatic offering.

In the legislation, there is a specific clause that states if the coin were to be minted in gold in 2009, future year issues could only be made of palladium — a precious metal that typically is priced at about half that of gold. 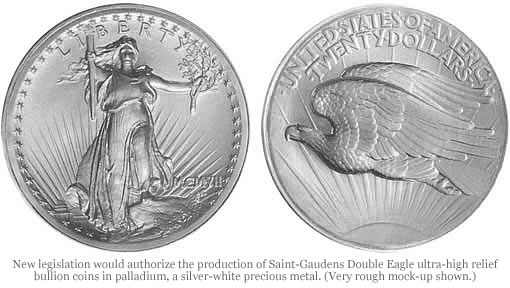 A Mint statement offered the following history of the famous Saint-Gaudens’ design:

In 1907 Augustus Saint-Gaudens sculpted what many have called the most beautiful piece ever created by the United States.  There were four versions of the Saint-Gaudens $20 gold piece created in 1907.  The first was a 34-millimeter diameter coin in ultra-high relief, with the date in Roman numerals.  Approximately 20 of these coins were produced before it was determined that the minting process was too arduous for mass production.  Most of the 20 coins are in private hands.

A second version with similar design elements and ultra-high relief was minted on a 27-millimeter diameter blank that had about twice the thickness of a $10 gold piece.  However, the United States Mint realized that there was no authority to issue coins using those specifications.  Of these gold pieces, there are two still known to exist, and they are housed at the Smithsonian Institution.

The third version returned to the 34-millimeter diameter.  The design remained similar, but was executed in high relief, rather than ultra-high relief.  Approximately 12,000 of these coins were minted and issued.  The fourth and final version, which was minted at the end of 1907, lowered the relief even more, and replaced the Roman numerals with Arabic numerals.  These coins were minted in mass quantities for circulation.

I hope that Austin Rare Coins could aquire this Ultra High relief Saint-Gaudens Gold Coins from the Mint next year. Please ask Austin Rare Coins to buy these coins for me! This is unique kind of gold bullion coins beside Gold Buffalo and Gold Eagle and Silver Eagle as well as Platinum Eagle Coins.