The National Bank of Poland (NBP) has launched a new two-zloty coin for collectors commemorating the Polish town of Bielsko-Biala. The commemorative is the final coin released within the ‘Historic Polish Towns’ collector coin series. Thirty-one previous historic town coins have been released. 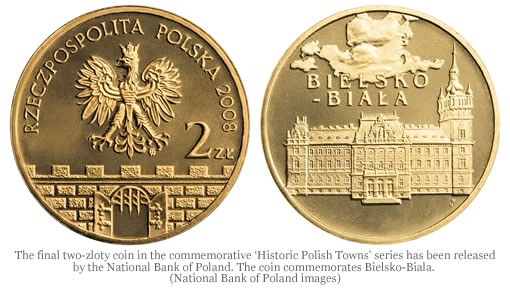 The two-zloty commemorative coin has a mintage limit of 1.1 million and is composed of Nordic Gold, which is mostly copper.

The reverse or tails side of the coin has the name of Bielsko-Biala inscribed and depicts the cities’ town hall. The obverse or heads side of the commemorative coin has the image of the Polish white eagle, which is the state emblem of the Republic of Poland, over masonry with an open gate.

Bielsko-Biala is a city in southern Poland with 180,307 inhabitants reported in 1999. The city was created on January 1, 1951 when the adjacent cities of Bielsko and Biala were unified.

Bielsko was founded in 1312. From 1457, the Biala river was the border between Silesia and Little Poland. Silesia belonged to Austria, Little Poland to Poland. In 1723 on the opposite bank of the river the city of Biala was founded.

The previous commemorative coins in the ‘Historic Polish Towns’ series were:

The Bielsko-Biala commemorative coin is available through National Bank of Poland branches, the post office and coin dealers.