Dallas, TX. One of only three known gold Wilson dollars struck in 1920 is being offered at auction in Rosemont, Illinois on April 16-18. The “so-called” Wilson Dollar was struck to commemorate the July 16, 1920 opening of the Manila Mint, which remains the only U.S. branch mint to ever operate outside of the continental United States. 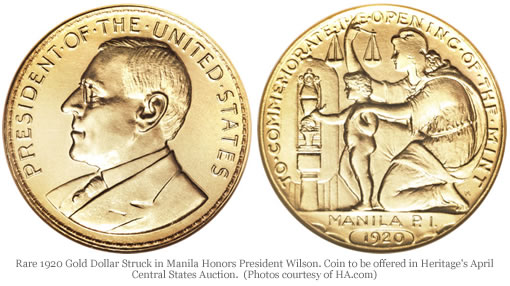 It is included in the catalog for the Official Auction of the Central States Numismatic Society convention, being held in Rosemont, Illinois on April 17-19; the catalog is now posted by Heritage Auction Galleries on their HA.com/Currency website.

“The Wilson Dollar,” continued Gamer, “was designed by George Morgan, who was the Mint’s Chief Engraver in 1920, and who was also responsible for one of America’s most beloved coins, the silver Morgan Dollar. The obverse (front) of the coin depicts a vibrant left-facing bust of President Wilson, who at the time was devastated by a stroke. The reverse (back) design features Juno Moneta kneeling with a youth, with elements borrowed from the reverse of the 1915-S Panama-Pacific commemorative half dollar. Befitting its special presentation status, this gold piece was struck at least three times – the evidence of the additional strikes is faintly visible on the date and other legends. The item has been certified by Numismatic Guaranty Corp. as MS62.”

Concluded Gamer: “According to the standard reference on such numismatic items, written by Hibler-Kappen, ‘only five gold pieces [were] reportedly struck’ and have been given an HK-1031 reference number. Silver (HK-449) and copper (HK-450) specimens of the Wilson dollar are also scarce. One of the five gold pieces was presented to President Woodrow Wilson, one to the U.S. Secretary of War, and three were retained in the Philippines (and lost during World War II). Heritage offered a different gold Wilson dollar in our February 2008 Medals and Tokens Signature auction, as lot 81185, but that piece had a mount removed from its edge. This example is unimpaired, and may be the only such pristine remaining gold example.”

What happened to Manila Mint in Philppines? If still exist today, is Manila Mint still operating for Philppine’s Coinage?