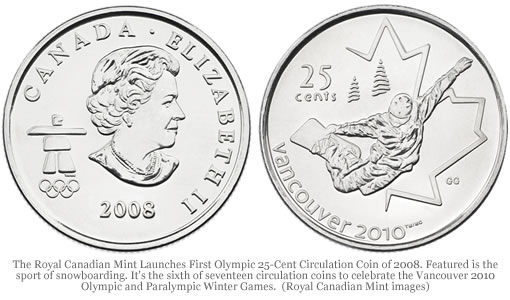 As well as the standard circulating coins, there are several other snowboarding products:

The commemorative hologram and first day rolls are also available to international customers on the RCM website. Telephone orders may be placed through the Mint at 1-800-267-1871. Finally, the coins may also be purchased through authorized dealers.

Ottawa, Ontario, February 20, 2008 – The Royal Canadian Mint today officially released the first Olympic 25-cent circulation coin of 2008. The sport of snowboarding is depicted on the coin, which is the sixth of 17 circulation coins to celebrate the Vancouver 2010 Olympic and Paralympic Winter Games.

“With two years to go until 2010, the Mint is delighted to be launching its second wave of circulation coins to commemorate the Olympic and Paralympic Winter Games,” said Ian E. Bennett, President and CEO of the Royal Canadian Mint. “Featuring the dynamic and energetic sport of snowboarding is a fantastic way to kick off 2008.”

Up to 22 million 25-cent snowboarding coins will enter into circulation today and will be available exclusively at RBC and participating Petro-Canada gas stations. RBC is a Premier National Partner and Petro-Canada is a National Partner of the Vancouver 2010 Olympic and Paralympic Winter Games. Canadians can also look for these special coins in their change. Participating Petro-Canada gas stations will also sell snowboarding sport cards, containing a uniquely painted version of the coin. The sport cards, which are now available, sell for $7.95.

Snowboarding is the sport of riding a large flat ski downhill over snow and was originally derived from the idea of a surfboard. While first making an appearance in the 1960s, the sport became wildly popular in the 1980s. Snowboarding made its Olympic debut at the 1998 Winter Games in Nagano, with Canada’s Ross Rebagliati winning the first gold medal ever in this discipline. There are three snowboard categories for both men and women in the Olympic Winter Games: halfpipe, parallel giant slalom and snowboard cross.

Designed by Canadian artist Glenn Green of Vancouver, BC, the snowboarding circulation coin features a snowboarder in the centre, a stylized maple leaf and the words ‘Vancouver 2010’. The obverse features the portrait of Her Majesty Queen Elizabeth II, rendered by Susanna Blunt.

Canadians can look forward to four more Olympic Winter Games themed circulation coins in 2008: three 25-cent coins will feature the sports of freestyle skiing (April 16th), figure skating (September 10th) and bobsleigh (October 29th), while the 2008 Lucky Loonie will be launched on July 23rd, prior to the Beijing 2008 Olympic Games.

Additionally, the Mint is offering a sterling silver collector version of the snowboarding coin, featuring a stunning hologram. The sterling silver coin was designed by artist Steve Hepburn of Richmond, British Columbia, and retails for $ 71.95. The Mint is also offering the first day 25-cent snowboarding coin ($15.95) and the 25-cent snowboarding circulation coin roll ($16.95). These items and other coins can be purchased through the Mint’s website at www.mint.ca by calling 1-800-267-1871 or through authorized dealers.

I have one of the coins i just found it

Can anyone tell me petro canada coins in a tin how many tins were minted.