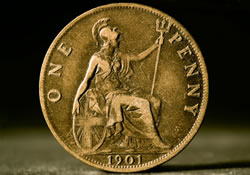 The Britannia image has been on British coins for centuries. But no longer. For the first time in more than 300 years, the figure of Britannia will not appear on new British coins.

The image first appeared on the copper farthing back in 1672. And like Lady Liberty is for the US, the Britannia image is filled with history and is symbolic of British democracy, patriotism and liberties.

The coming disappearance of Britannia from new British coinage has caused a bit of a stir for Prime Minister Gordon Brown, who approved the change as Chancellor of the Exchequer. Brown’s approval is marked in contrast to his public campaign of British patriotism, say critics.

However, the Royal Mint will launch a series of coins this year with many new designs that have been long in planning since 2005. According to a Treasury spokesman quoted in Telegraph.co.uk,

Although the newest coins will no longer bear the Britannia image, there is no stated law or intent for it to never return.

For another perspective of this story, read the following Newscom article, British coins to lose Britannia symbol:

Britainia still remain on Silver and Gold Britainia Bullion Coins. But all circulating coins all be something new!

The ‘New design’ on British coinage sybolizes the breakup of the U.K.. The are clones of the Euro found on the continent, no doubt to help slide us into the Eurozone without the population being aware.

Well now the new design coins are out, I quite like them but I do prefer pre Victorian coins for their history. If anyone is interested in collecting British coins I would recommend checking out this forum British Coin Forum the members on it are very knowledgeable and helpful.