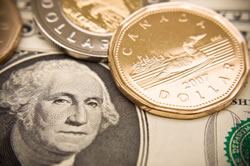 The surging Canadian dollar known as the loonie struck many headlines throughout 2007 and now it gets at least one more – the selection by Time magazine as the Canadian Newsmaker of 2007.

The loonie started the year at 87 cents US and hit a peak on November at $1.10. Most notable for the loonie, however, was Sept. 20, 2007 when it struck parity with the US dollar for the first time in nearly 31 years.

Imports were cheaper for Canadians due to the rise. However, a large percentage of Canadian exports enter the US, resulting in painful constraints in sectors like manufacturing.

In the coin collecting realm, Canadian collectors found US coins increasingly attractive while many US collectors discovered what it felt like to spend more for what they used to buy at a bargain. As early as 2002, US collectors were buying Canadian coins at a positive exchange rate of 62 cents.

If you’re wondering about the loonie name, the reverse of the Canadian dollar coin has an image of a wild lake bird, named the loon, floating on the water. The loonie nickname started shortly after the coin was first introduced in 1987.

Today, the exchange rate between the Canadian and US dollar is nearly equal (1.0011, CAD to US).

Rising Canadian Dollar make the currency best investment for Canadian Coins. This make investment in coins very profitable. If you know that U.S. Dollar will fall in value soon. You will buy Canadian Coins or European Coins in this Dollar rallies. You will get best of both worlds in collecting unique coins and investment in foreign currencies in hedge angainst inflation!