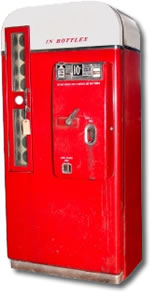 Every time a new dollar coin gets inked into legislation there’s a ripple effect many, including the bill’s inkers, don’t take into consideration.

It’s not malicious thoughtlessness. No person can have omnipotent foresight in knowing the consequences of every single decision.

Take, for example, the Presidential $1 Coin Act of 2005 that’s responsible for the new dollar coins. The law not only mandates the creation of the coin, but also includes requirements to help drive its success with the public.

Although it hasn’t always happened from day one, part of a new coin’s circulating success is ensuring its design and composition work with vending machines. If that doesn’t happen, it’s hard for any new coin to succeed. Obvious? For sure. A coin has to be useful, not just pretty.

In that regards, the Presidential $1 Coin Act of 2005 has the following provision in SEC. 104. Removal of Barriers to Circulation:

"…all entities that operate any business, including vending machines, on any premises owned by the United States or under the control of any agency or instrumentality of the United States, including the legislative and judicial branches of the Federal Government, shall take such action as may be appropriate to ensure that by the end of the 2-year period beginning on such date–

`(A) any business operations conducted by any such agency, instrumentality, system, or entity that involve coins or currency will be fully capable of accepting and dispensing $1 coins in connection with such operations; and…"

Notice the bolded portion. In short, it mandates that vending machines be capable of accepting AND dispensing $1coins. Logical, right? Perhaps not so in every case.

Companies like Coca Cola seek an amendment to the law

Some companies are concerned that the law, as stated, requires all vending machines to stock the $1 coins in their change boxes even though they NEVER dispense anything close to a dollar in change.

Coca Cola is apparently so concerned that they’ve hired a lobbyist firm in the hopes of helping them out. A suitable "fix" would be adding language into an amended bill that would limit the $1 coin dispensation requirement to vending machines that take larger currency, like $5’s $10’s, and $20’s.

What is the real problem?

A skeptic may argue that if a vending machine can accept a new $1 coin, it should be able to dispense it. Of course, skeptics don’t know everything either. There are expenses in modifying machines that are working perfectly now, according to their original design and intent.

Then, naturally, there’s the extra expense and possible hassle of hauling around heavier $1 coins – something many banks and stores have to dislike as much as many in the general public.

What’s so unusual is the apparent lateness in all this. The vending machine mandates are about to go into affect and the law has been on the books for some time.

It is another example of the difficulties in making a dollar coin a true competitor and winner over the paper note. There are many forces working against it and some, perhaps, for good reasons.

I can understand Coca Cola’s concern. In a way this law for them and similar vendors would be a sort of a step backwards in common sense. They’d have to fill their machines with more money than they had before, making the machines a more worthwhile target for vandals and thieves.

All the focus on dollar coins these days, why does the 50¢ piece get no loving? A soda from the machine at work costs exactly $1.50. The machine will take a $1 bill or coin and two 25¢ coins, but it will not take a 50¢ coin! It’s just plain silliness, if you ask me. Every item in that machine is $1.50, but the machine will not accept the coin and dispenses two quarters whenever someone pays with $2. I wonder if it has occurred to them that they wouldn’t have to refill the coin tubes as often if they… Read more »