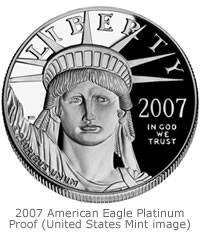 Coin collectors have been awaiting for the expected announcement and it’s here.

It’s the 10th anniversary for the American Eagle Platinum coins and to celebrate, the U.S. Mint has changed it up with a limited edition, two-coin set that’s just for collectors.

Included in the set is one proof coin and, for the first time ever, one enhanced reverse proof platinum coin. Each contains one-half ounce of .9995 platinum.

Pricing and product details for the platinum anniversary set

Before you get too excited, realize we’re talking about coins with platinum – that non too cheap metal. Otherwise, the price of this special set may take you for a bit of a spin. Hold on…

The set includes an ‘enhanced reverse’ proof coin. What is that?

You can read the long description of what a proof coin is, or quicker, here’s what the Mint says about this set:

The Mint has the "normal" one-half ounce American Eagle Platinum Proof coins priced at $880.95. Given that the anniversary platinum set includes one of the normal proofs, doing some simple calculation reveals the enhanced reverse proof coin would cost ~$1069, if it were to be sold by itself.

Currently, the London Fix price for an ounce of platinum is hovering in the $1420 range, making a 1/2 ounce about $710. Using napkin math, the price of the anniversary coins above the current spot price are:

Not when you consider, for example, other percentage mark-ups like modern silver proof coins. Try some napkin math on those.

The 10th Anniversary American Eagle set is a very attractive offer… IF you have that type of money to spend.

Buying and ordering information for the set:

The Mint press release has more details regarding each coin. Currently, there is no image available for the enhanced reverse proof eagle.

[…] definite interest in these coins. Several thousand CoinNews subscribers read our Nov. 28 article about the anniversary set, making it a top 5 for the month of December. Whether that napkin math analysis translates to […]

Just wondering why not make a three 1 oz. platinum anniversary coins set just like the 20th anniversary gold and silver eagle sets with the reverse strikes ? In fact all the eagle anniversary sets were 1 oz. coins except this one. Don’t know what the thinking behind it ? The cost will diffinitely be higher but I also think it would be more desirable to the collectors and even investors. You got all these 1 oz.ers and then this 1/2 oz. set that you need to look at with a magniflying glasses. Hopefully it’ll be in a large wooden… Read more »

gotta gettit donnoy: The reason is clearly to make it more affordable to the average collector. You get the frist Platinum Eagle Reverse Proof Coin ever produced by the US Mint in a set that more people can afford, which is why the mintage limit was set at 30,000.. If the sales are considerably less, then the value of the set will be greater, which will be a win for the average investors buying the set.