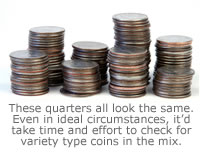 There’s nothing better than some variety between coins to peak a person’s interest and excitement. The 50 State Quarters® and new Presidential $1 Coins highlight how changing a coin’s design every few months can kindle passion with at least collectors.

What’s your excitement level when a batch of coins gets minted but a percentage of them have slight variations compared to others in that coin’s series?

Hold your thoughts… In this case, we’re not talking about coins with errors due to mint manufacturing mistakes or unintended die varieties. (Although these are very intriguing for many collectors too.) Let’s dig in a bit more…

Do you remember the old Sesame Street game, "One Of These Things Is Not Like The Other…?" It was very easy to find that one thing.

That’s not the case for most variety type coins unless you have a well trained eye. These coins often have the same date and always the same basic design of their brethren coins, making their slight variations even more difficult to notice.

Yet, their variety and the quantity produced is significant enough to classify them into their own group or, specifically, a variety type.

In the early history of coinage, dies were created by hand, resulting in each being unique. As such, coins had subtle differences from comparable coins and many varieties existed even when the outmost care was taken.

If there are too many small or insignificant variations in a coin series, like some early coinage, it’s difficult to group or classify them into a specific variety type. Let’s set these aside too.

In the U.S. over that last 150 years or so, better standardization and automation improved the coin manufacturing process. Die and coin variations became less common.

But they still exist. In fact, some coin variety types since then have been created on purpose to improve a coin’s design and have major design variety types. That’s what we’re after here! 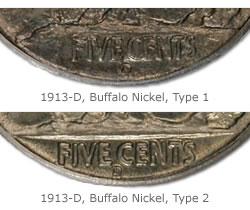 A variety type example with the Buffalo nickel

A popular example is the first year of the Buffalo nickel. There are two variety "Types" for this 1913 coin:

The Buffalo nickel Type 1 lasted less than a year while the populous Type 2 coin design remained until the very end of Buffalo nickel series, which was 1938. 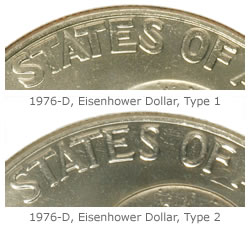 A more recent variety type example with the Eisenhower dollar

A more recent example of modifying designs within the same year happened with the Bicentennial Eisenhower Dollars.

There are also two variety types for this 1776-1976 coin. The most noticeable difference between the two can be seen by the naked eye:

The Type 2 variety is also noted for having a sharper design while the Type 1 has lower relief.

The rewards of variety type collecting

It’s now easier to understand why coin variety collecting is so exciting for many. It has an extra element of intrigue, history and uniqueness.

We only covered a small cross section of varieties in coins. When you throw in error coins and those unintended die varieties into the mix, things really stir.

This is a finely tuned area of coin collecting, requiring deeper knowledge and experience, certainly. But it can be hugely rewarding.

If you’re interested in diving into this area of numismatics, you may find Die Variety News of interest. It’s an excellent resource with detailing photo examples. It’s also free.