The battle heated up even further over what may be a $500 million treasure of gold and silver coins recently discovered within a sunken ship. Odyssey Marine Exploration, a Florida-based treasure hunting company, laid claim to the bounty back in May. And it’s a gigantus find! 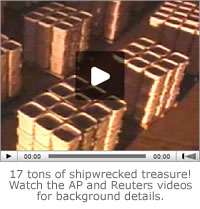 Odyssey continually affirms that the 17 tons – yes, that’s tons – of Colonial-era treasure was found in a shipwrecked vessel in international waters.

On the flip-side of the dispute, Spain has filed claims contending the sunken treasure was from a Spanish ship or taken from Spanish waters and is, therefore, the property of Spain.

Is this a case of finders keepers; losers weepers?

However it turns out, Spain is doing more than weeping. At 9 a.m. (0700 GMT) on July 12th, Spain’s Civil Guard seized one of Odyssey’s ships. News reports say the Civil Guard shadowed the vessel for several miles and then boarded it upon clearing Gibraltar waters. Who’s pirating who?

More news is destined for this high sea’s adventure!

CoinNews.net » Is the Shipwrecked $500 Million Coin Treasure Up for Grabs?

[…] week ago we discussed the Spanish seizure of an Odyssey Marine Exploration ship. For a recap, Odyssey is a Florida-based treasure hunting company that found over 17 tons of […]